Before German Shepherds, Belgian Shepherds, and Beagles became the standard breed for the military and police dogs, the U.S. Army and Marine Corp asked average Americans to loan their pets to the war efforts. During World War II, not long after the attack on Pearl Harbor, the American KennelClub and a new group calling itself “Dogs for Defense” mobilized dog owners across the country to donate quality animals to the Quartermaster Corps. It is mind blowing to me to try to imagine a time when beloved house dogs, donated by a patriotic public, saved soldiers’ lives in combat, but they did!

At first more than thirty breeds were accepted.  The military quickly figured out that Great Danes were too big, Dalmatians were too easy to spot (get it, spot), and  hunting dogs were easily distracted. The military later narrowed the list down to German Shepherds, Belgian Sheep Dogs, Doberman Pinschers, Farm Collies and Giant Schnauzers.

In all, a little over 19,000 dogs were procured between 1942 and 1945 (about 45% of these were rejected as unsuited for training). The Quartermaster Corps trained the dogs to be sentry dogs, scout or patrol dogs, messenger dogs, mine dogs, and bunker dogs:

Worked on a short leash and were taught to give warning by growling, alerting or barking.  They were especially valuable for working in the dark when attack from cover or the rear was most likely.  The sentry dog was taught to accompany a military or civilian guard on patrol and gave him warning of the approach or presence of strangers within the area protected.

In addition to the skills listed for sentry dogs, scout/patrol dogs were trained to work in silence in order to aid in the detection of snipers, ambushes and other enemy forces in a particular locality.

The most desired quality in these dogs was loyalty, since he must be motivated by the desire to work with two handlers. They learned to travel silently and take advantage of natural cover when moving between the two handlers. (A total of 151 messenger dogs were trained.)

Called the M-Dog or mine detection dog they were trained to find trip wires, booby traps,  metallic and non-metallic mines. (About 140 dogs were trained. Only two units were activated.  Both were sent to North Africa where the dogs had problems detecting mines under combat conditions.)

Don’t know what that is? This America Life has an episode about Animal Sacrifice.  Skip to: Act 1 – Semper Fido at  5:00. If you are a dog lover, a history buff, or just a lover or a good compelling story – take 20 minutes and listen to this story. They explain what a bunker dog is as well as tell the story of what happened to “Fluffy” once you loaned your beloved pet to the military for service in the Dog Defense program. 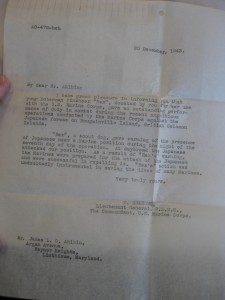 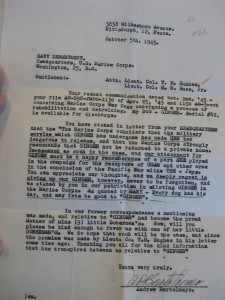 On D-day, dogs were there when the Allies liberated Normandy. The dogs served as message carriers, scouts, and vital night security, and were constantly employed during the operation of securing and extending the beachhead.

On D-day, the British dropped parachuting dogs or “paradogs” onto the beaches.  How do you get a dog to jump out of a plane and parachute to the ground? With a steak of course.

It is amazing what dogs will do to please their master or get a steak! A children’s book was published documenting a famous, heroic parachuting dog named Bing. 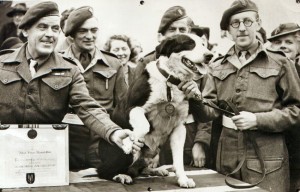 During World War II, the British Army trained dogs to jump out of airplanes with soldiers. This crossbred Collie, Rob, reportedly made 20 jumps and took part in the North African landing. Here, the paradog is presented with the Dickin Medal for animal gallantry in Feb. 1945. There is even a children’s book about him: Rob the Paradog. 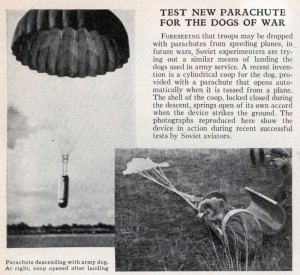 The idea picked up steam in the years to follow. Here, a piece in Popular Science magazine from November 1935 discusses Soviet experiments with parachutes for dogs.

After the war, the military declassified this War Department video that shows an overview of the work done by Army dogs in World War II.

The US Quartermaster Foundation website also tells the story of the history of the Quartermaster War Dog Program or the the “Canine Corp” from 1942 – present. It is a quick and interesting read. They also have a post about how the K-9 units saved lives and were an active part of D-Day

If you squint just right, my Chankla might qualify as a Belgian Shepherd and I can’t image a world where the right thing to do was to send her to war. Of course, we would have probably gotten one of those insulting rejection letters based on her “independent and untrainable” nature., but I digress. She, and I are very thankful for  the Greatest Generation, both man and dog alike, that sacrificed their lives to fight and win the Great War and change the path of history.

Our modern military has continued to use K-9 units and has developed sophisticated training programs for our country’s K-9 units. Military dogs have progressed over the years from being viewed as equipment to being full fledged military members. Military working dogs get all kinds of honors, including Meritorious Service Medals and Army Commendation Medals. Some dogs have also received Purple Hearts and Silver Stars.

How can you support military dogs as a civilian? You can adopt a retired military dog, foster a puppy in training, or support a K-9 unit with a care package. Check out Save-A-Vet.org. If you live within two hours of Lackland AFB near San Antonio and love puppies you might consider helping out as a foster home in their MWD Breeding Program. This involves raising a puppy from 12 weeks to 6 months of age before these future military working dogs are ready to enter their training.

If you live too far away, you might consider “adopting” a K-9 unit at a base near you or anywhere in the world. Their fellow-soldier human handlers love their canine partners and often appreciate treats, toys, and other specialized items the government may not have provided for them. Save-A-Vet often send such care packages to units deployed in the field. Check in with Save-A-Vet first to make sure you know what they need.

Lastly, today is the 70th anniversary of D-Day. If you know or see a a member of our Armed Forces or a Military Veteran, human or canine, be sure to thank them for their service.