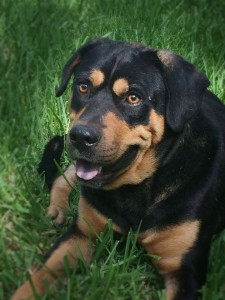 What does that mean habituate the dog to positive human interaction? Before ”positive habituation” Elmer would see people and run away. After a few weeks of work, Elmer would see people and run away with the exception of his fairy godmother. After a little more work, Elmer trusted fairy godmother enough to let her bring some human friends into his personal space and he would trust her judgment and stay in the area with the visitors. Each step was a baby step towards trusting people. Fairy godmother was the core relationship that helped Elmer start to trust humans and eventually be captured and fully rehabilitated.

Fairy godmother took our tips and fed him on a schedule and she gave him a warm dry fluffy place to sleep on her porch. She also used our body language tips, dog language tips and before long they were on the way to building a trusting relationship. She was quiet and gentle and she let Elmer do things on his time. Fairy godmother understood that every interaction needed to be a positive interaction. As soon as she could consistently touch Elmer, it was time to get Elmer to the vet and on his way to a new life.

Elmer would allow fairy godmother to touch his neck and head, so we went to visit and put a martingale collar on him. He did not object. The benefit of a martingale collar is that the dog cannot back out of the collar and escape if they are resistant or fearful when on a leash. We also put a tag with a phone number on his collar encase something happened to him before we were able to catch him. From there, fairy godmother worked to get Elmer used to a leash. She would hook the leash on and take it off, hook it on, take it off, and soon he was ready to try to walk on the leash. Fairy godmother tried and tried to get Elmer to walk on a leash so he could go to the vet, but Elmer simply refused. He would flatten out like a pancake in fear. She would gently pull and tug him in hopes that he would get up and walk, but Elmer quickly figured out that if he shut down and refused, he didn’t have to do it. She tried treats, doggie friends, but nothing worked to convince Elmer to walk more than a step or two. He would belly crawl over to the bushes and lay low. We came over to help and quickly realized that Elmer was going to need a more controlled, restrictive environment to learn to walk on a leash. He was a successful street dog who was used to making his own decisions and we were going to have to take away a little of that freedom.

Elmer was on borrowed time roaming the streets. We were pretty sure that he had been hit by a car at some point and leaving an un-neutered, unvaccinated dog on the streets was asking for more trouble from other male dogs, cars, and disease. We did not want to miss our opportunity to help him and so we hatched a new plan to get him.

One day, sweet gentle Elmer trusted fairy godmother enough to let some new friends pet him. They rubbed his belly and fed him treats and then BAM – Elmer woke up a prisoner in a strange place. He woke up vaccinated, dewormed, heartworm tested and recovering in the kennel at the vet clinic. 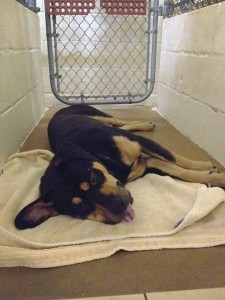 Elmer knocked out in his run after his capture

We wanted Elmer’s capture and transfer to be a calm and a positive experience. We did not think we needed to set a trap for him. Trapping can be dramatic for fearful dogs and although we are perfectly fine using that method when appropriate, we did not think we needed to do that for Elmer. At this point we could have also used a rabies catch pole to catch him, but we wanted to try to continue to use positive interactions to keep forward momentum with his trust and socialization. We simply leashed him, got him to pancake himself in the grass and then we worked strategically to gently restrained his head (really his teeth) and then Dr May, a licensed veterinarian, jabbed him the butt with a sedative shot. Because we are tricky humans, Elmer will not associate that experience with anything we did. 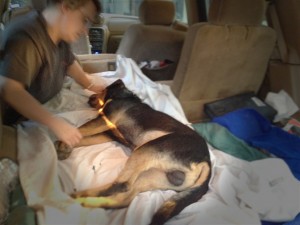 Elmer getting loaded in the car

A few minutes later we were zooming off the vet clinic. Elmer checked out with the usual street maladies -he had every worm known to man including heartworms. His leg has been visibly bothering him so we checked that out too. He was given some meds to make his leg feel better and we decided to fully check out his leg when he was under anesthesia again later in the week for his neuter. 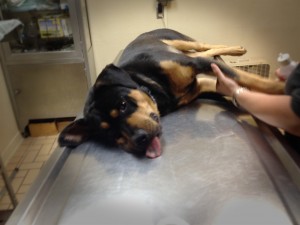 Elmer’s first couples of days were the usual adjustment period with the exception of one thing. If you can touch, pet, and leash a dog, it usually it only takes a day or two to get a dog to get the hang of walking on a leash. Elmer was exceptionally stubborn on this front. He was so behind the curve, we started to wonder if he was a few peas short of a casserole. 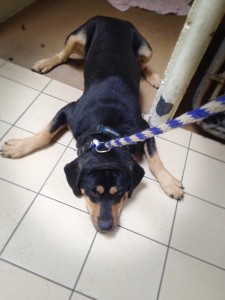 Elmer does the pancake routine as we try to get him to walk out of his run.

But as it turns out, Elmer is a genius – he just had a few reasons to worry and resist. When we x-rayed Elmer as part of his heartworm treatment prescreening, the xray showed that he had several recently cracked rib and he had been shot by a pellet gun. Poor Elmer! The good news was that this guy does not hold a grudge and is really quite grateful for his new kind human friends. 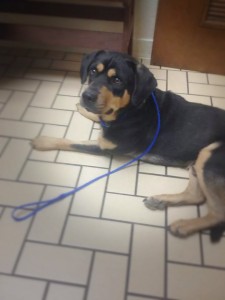 Elmer walks to the exam room for a visit

On the fourth day, Elmer realized nothing bad was going to happen to him and you could visibly see it start to click for him. He started coming to the front of the kennel and he started walking on a leash (mostly) voluntarily. His body language became more relaxed and he started to understand that the kennel was a very safe, happy place. Fairy godmother and foster Katie came to visit him and there was much rejoicing. 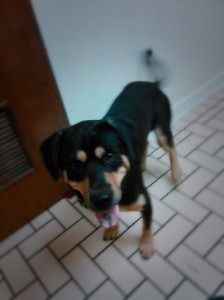 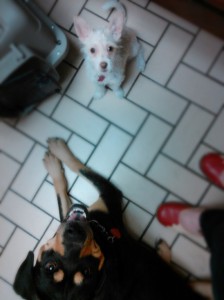 Elmer and Katie have a visit

Once Elmer had the hang of walking on a leash, it was time for his neuter. Dr May knocked him out without incident and because we could, while he was unconscious, he got a much needed bath. Sneaky, sneaky humans.

The next step for Elmer was getting him to walk on a leash outside. There was a lot of uncomfortable body language, but Elmer was a champ and started to trust that he would be OK. 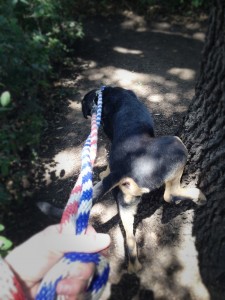 Elmer takes his first potty outside – it was so long he had to rest his foot on the tree. Ahhhhhhh

He  found the clinic’s giant old tree and took a much needed potty break that went on and on and on and on. After that break, he loosened up quite a bit. We walked around the parking lot, rested, had pets, ate some treats (when he was relaxed enough to take one) and visited with some of the other clinic dogs who were out on a walk. Elmer quickly got the hang of walking on the leash outside and he quit flattening out like a fearful pancake. 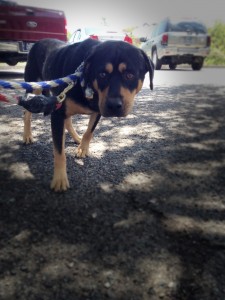 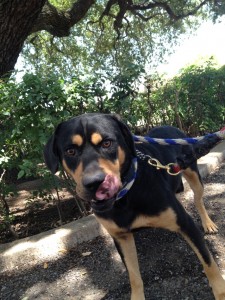 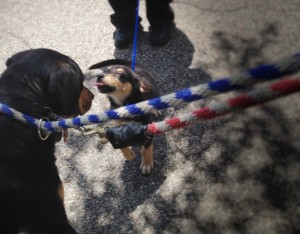 Elmer’s next steps are to learn to ride in a car, learn how to live in a house, and learn to be crate trained. We will continue to check his temperament around other dogs, cats, and kids. As soon as Elmer is crate trained he will be treated for heartworms. After the treatment he has a 4 week post heartworm treatment confinement period. Fariy godmother has agreed to foster him during that time. As soon as he is finished with that confinement period, he will have a clean bill of health and will be ready to go to his forever home. He really is a big teddy bear looking for someone to love him. He is going to make someone a very loyal, loving companion.

And as always, a BIG shout out to Dr Perkins and the Arapaho Road Animal Clinic, Dr May, and all the wonderful caring staff at the clinic who worked with, and continue to work with, Elmer to get him on his way to being a healthy, domesticated companion animal. His new life would not be possible without their care, expertise, and generosity. 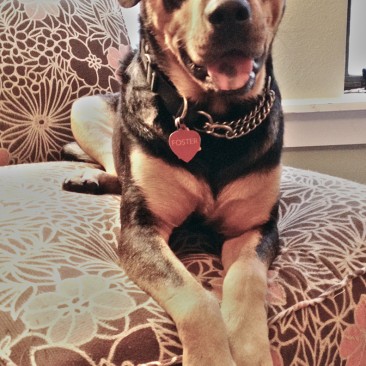 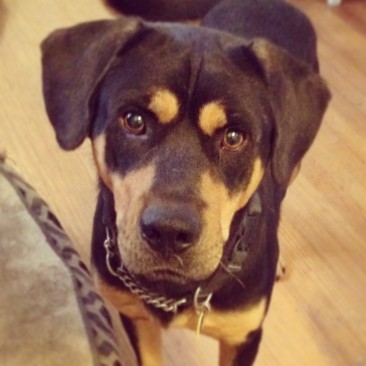 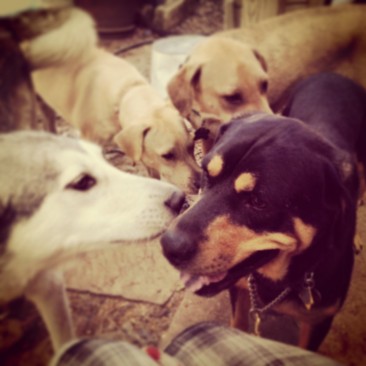 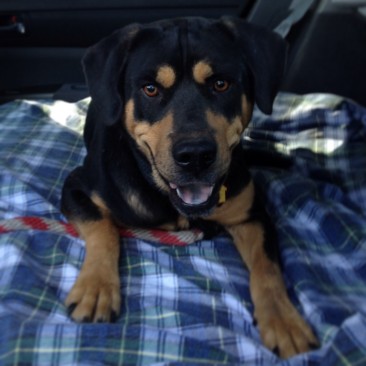 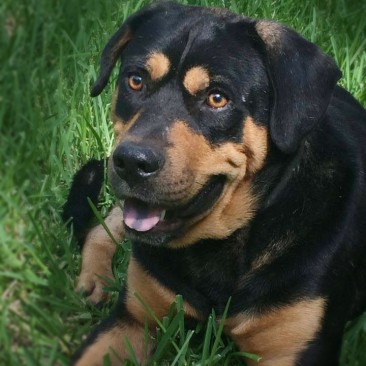 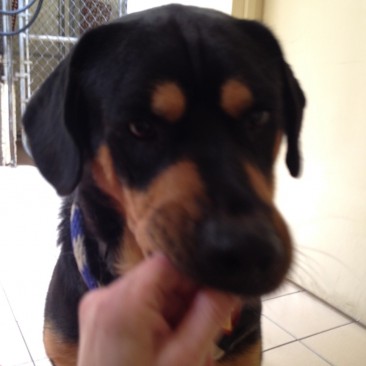 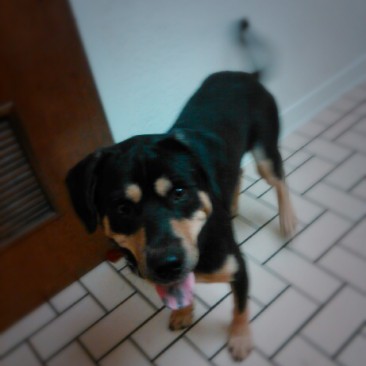 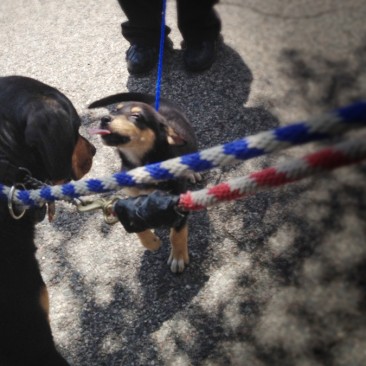 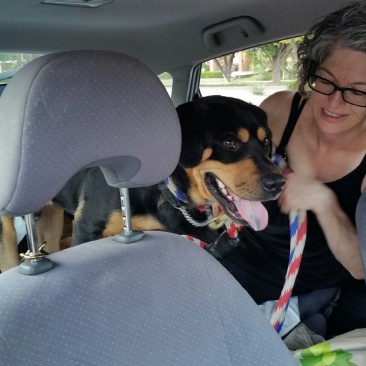 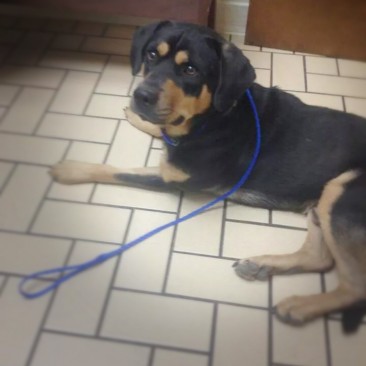