In 2011, the 15 dog dog pack tried unsuccessfully to eat Honey the cat several times.  During the time that the dog traps were set, Honey couldn’t resist the dog trap bait. In her defense, the bait was cat food. It could be said that Honey was outsmarting all of us when she found both food and safe haven from the dogs in the city dog trap. She was seen in the trap on several occasions helping herself to the cat food buffet. It is illegal to release an animal from the city trap, so how she escaped from the trap is a great mystery. Maybe “TrapBreaker” was giving her tips. 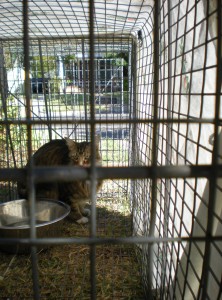 At some unknown time, Honey’s owners moved on and left her to become a “neighborhood” cat. We all thought she had an owner, but over time began to realize she did not. She was doing pretty well for herself until a dog got hold of her tail and made a mess of it. It was at that time that she came looking for dog lady.

She would hang out on the porch and wait for me. I explained to her that I did not “do cats” and that she needed to go on someone else’s porch and tell someone else her story. I explained to her that my nick name was “dog lady”, but she didn’t care. As she grew sicker, she became more and more persistent. She kept trying to come in the house, all the while my dogs were trying to eat her. When she finally made a wild run for it and got in the house with the dog trying to eat her the entire way –  she earned her nick name: Honey Badger Kitty Cat. ‘Cause Honey Badger Kitty Cat don’t care!

For Honey, desperate times called for desperate measures. She was going to get help even if it meant running into a house full of dogs  – and she was right. Dog lady paid attention. I stuffed her in a cat kennel and took her to the vet. She had a terrible fever and infection. She was a hot mess. Despite what it might do to my reputation to help a cat, we put her in “the program”.

As it turned out, Honey was declawed. That poor cat was defending herself against the dog pack with no claws! Honey Badger Kitty Cat really didn’t care!! What a bad @#$!

We fixed up Honey, who actually turned out to be a big lover. We adopted her out to one of vet techs who fell in love with her while she was being rehabilitated. She loves that fluffy sassy cat and has restored her to the spoiled rotten lifestyle a declawed indoor kitty deserves. And now, we just call her Honey. 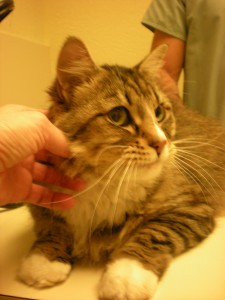