A friend called to see if I could help her neighbor with two stray dogs.  Not the kind of thing I normally do, but she was very persuasive.  Two large dogs were hanging out in her Kessler neighborhood.  Neither of them was spay or neutered and they seemed to be on an endless date.  They were agitating the neighbor’s dogs and generally upsetting the normal balance of things. We could lure the German shepherd but not her “boyfriend”. With some persuasion, we loaded her into the car and took her to the vet leaving the “boyfriend” behind.

As she was unloading out of my car at the vet clinic, Dr. Perkins stopped in his tracks on his way to lunch and started asking me about her. He had a client in mind the minute he saw her. We went in the clinic and started her initial exam. While she was getting checked out, he was on the phone with one of his long time clients. His client had recently put to sleep their long time love and companion who was also a German shepherd.  His client agreed to come see her that afternoon and before I could even get back to Oak Cliff, she was adopted. She needed a few more days at the clinic for her spay,  heartworm treatment, and then she was on to her new forever home.

Sam holds our world’s record for being rescued, vetted and adopted. Start to finish (commitment to the dog) it was less than 4 hours! OK – her spay was the next day  and we did continue to looked for her owners and any signs posted in the neighborhood, but we could not find notice of anyone looking for her and so her adoption was finalized.

When we rescued Sam and placed her in her new home, she was in pretty rough shape. She was underweight, heartworm positive, skittish, and had been on the streets for an undetermined amount of time.  She is now a picture of health, love, trust, and happiness. 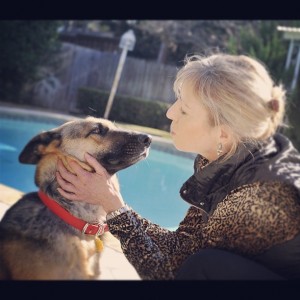 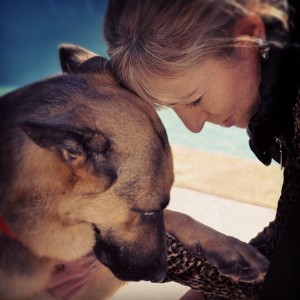 If you know me at all, you know I love to play 6 degrees of separation with all the Oak Cliff strays. They do all start to look related after a while…and I always think it’s because they are cousins. The probablity is high. One day when I am rich I am going to run DNA tests on all of them. 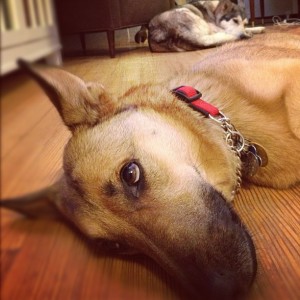 What happened to Boyfriend?  Boyfriend was a little more feral and took considerable more time and effort.  You can read about Boyfriend on his page which will be coming soon 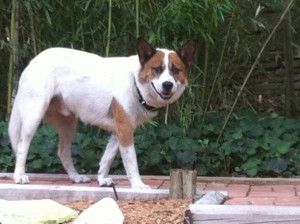 Both Sam and Boyfriend are poster children for spaying, neutering, giving year round heartworm preventative, and chipping your pets!  You bet they both have have all that now!