I have two dog rules. One of them is: three dogs is dog lady and four dogs is crazy dog lady. I was already at three dogs and there was a pack of wild dogs in my front yard, so fate was looking out for that little dog as I did the math on how many dogs it would take to be super crazy dog lady.

I was on my way to meet my friends for breakfast after church and there she was in the middle of a 9 lane intersection, cars rushing all around her. As I started to pretend to not see her, I could hear my Pastor’s words fresh in my head – it is not always an easy path to understand your gifts and how you can use them to serve…but you have been given a purpose.

As I turned the car around, there was a lot of subsequent grumbling about ME getting hit and killed while I tried to get this little dog, who was probably just going to run across traffic anyway. And what was I going to do? I already had three big dogs, they would probably eat her! My purpose was much more likely to commune with my friends over peanut butter and jelly waffles , (oh yes, they exist) than to save some street Chihuahua. I threw on the flasher and I called to the dog. To my amazement, she stopped and came over.

She cowered down by the car door and then acted like she was going to bite me. A car zoomed by and almost hit my car door. I looked at her and said, “You do what you gotta do. If you bite me, I’m not dropping you, we’re not getting run over, and I’m going to Jonathans for breakfast.” With that I grabbed her by the scruff of the neck and tossed her in the passenger’s seat. She looked very violated but kind of relieved to be out of traffic.

She sat paralyzed in the front seat completely afraid of the unknown that was happening around her. We pulled up at Jonathans and I told my friends I had to take her home and drop her off. “Of course you do” they said, who doesn’t have to take a stray dog home on the way to breakfast. They got a table and patiently waited.

When I got to the house, I put a slip leash on the dog and called her out of the car. And then the real drama began. Apparently she had never been on a leash before. She went into a full alligator roll and rolled up under the car and stuck her head up in the undercarriage. Really Pastor Ed? I just wanted some waffles. Do I have to sacrifice breakfast? 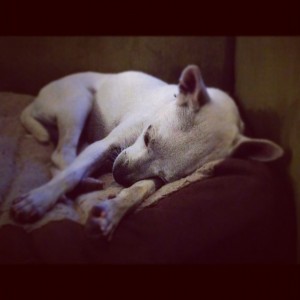 Eventually, I unceremoniously drug her out from under the car and gave her the “you do what you gotta do” conversation again, and then picked her up, took her in the house and put her in a kennel. I left Chankla in charge and I went to breakfast. What? She is a herder and she likes to have a job.

After breakfast, I took a look at the dog. Turns out, other than never having walked on a leash and being generally unsocialized, the dog was pretty chill. Suspiciously chill. She couldn’t keep her eyes open, couldn’t stay awake, and seemed to have a bad cold chill. Too chill turned out to be half dead. She had a bad case of distemper.

Dr Jacky told me not to get attached to her, over the next week she would be at risk for seizures and if at any point she had a seizure, we would have to put her down.  If we didn’t run into any seizure issues, we also had to get past pneumonia  and respiratory challenges, but she felt like we could beat those with some time.

Seriously thought, who couldn’t get attached to that face? 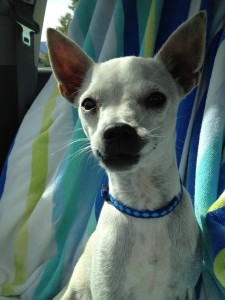 The dog quickly realized I wasn’t out to get her and she became the most grateful adorable thing ever. She learned to walk like a champ, she house trained, crate trained, she partied with the other dogs, and adjusted to being a trusting part of a family.

She sounded a lot like an asthmatic old lady for a couple of months, but most interestingly, when she was really protesting or excited, she made sounds like a bird. I kept looking around for a parakeet. And so she was named, Birdie.

After several months and several rounds of antibiotics, steroids, nebulizer treatments, and loads of sitting on a Pit Bull, we were able to get her respiratory issues under control. (Pit Bull is still looking for her forever home) Her old lady cough is gone, but her adorable bird sounds remain. 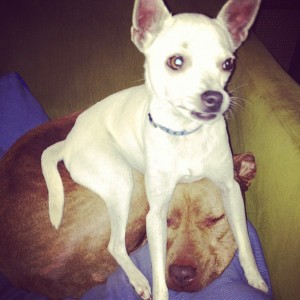 During her treatment, Birdie had someone who was interested in her, but we wanted to make sure that there would be no long term problems from the distemper, so we did not declare her ready for adoption until late December. But while we were waiting for her clean bill of health, her potential forever owner was teasing his wife, telling her the dog already found a home and was no longer available. And just before Christmas, he surprised her with small Christmas gift box with a dog tag engraved with Birdie’s name. 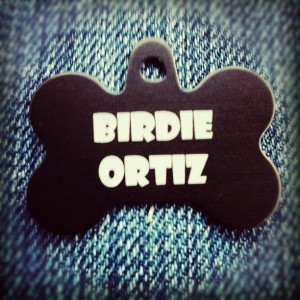 And then Birdie appeared as a great Christmas surprise!! Birdie has scored with her great forever family and has not had any problems adjusting to her new spoiled rotten life!! 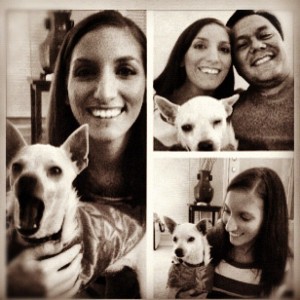 Hurray for a second chance! Birdie is a poster child for why is it important to vaccinate, spay, and chip your pets. Distemper is nasty business and often ends in death.  As the days turned to weeks and weeks turned to months during Birdie’s treatment, I absolutely understood how my gifts were going to effect Birdie. Pastor Ed was right, it is not always easy, but the rewards are great. It was my honor and pleasure to be able to not only help save her life, but to allow her to be nurtured so her personality could blossom and then be fully appreciated in her forever loving home. She is very special party pants Chihuahua. 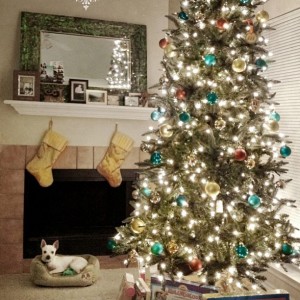 We urge you to consult your veterinarian to keep your dog on an updated vaccination schedule.