Think you’ve seen local wildlife with rabies symptoms? You may have, as distemper and rabies are part of our eco-system here in Dallas and certain areas are experiencing a distemper outbreak.

WHAT should you do to protect your pets and WHO should you call when you see a potential neurologic animal? Here’s the neurologic wildlife 101 to help you know how to spot, report, and prevent rabies and distemper.

Rabies and distemper can affect raccoons, possums, foxes, coyotes, skunks, and insectivorous bats. These diseases can be spread to domesticated dogs, aka your house pet. Let’s look at how are these diseases are transmitted and what can we do to prevent transmission to our pets.

How is rabies transmitted?

From the Mayo Clinic: “Rabies infection is caused by the rabies virus. The virus is spread through the saliva of infected animals. Infected animals can spread the virus by biting another animal or a person. In rare cases, rabies can be spread when infected saliva gets into an open wound or the mucous membranes, such as the mouth or eyes.” This is why the law requires all dog bites be reported. Reporting, and the subsequent monitoring of dogs for symptoms, is an important part of rabies control.

How to Prevents Rabies

Why Should You Take Potential Rabies Exposures Seriously? Once a person begins to exhibit signs of the disease, survival is rare. To date less than 10 documented cases of human survival from clinical rabies have been reported and only two have not had a history of pre- or postexposure prophylaxis.

From PetMD: “Canine distemper is a contagious and serious viral illness with no known cure. The disease affects dogs, and certain species of wildlife, such as raccoons, wolves, foxes, and skunks. The common house pet, the ferret, is also a carrier of this virus. Young, unvaccinated puppies and non-immunized older dogs tend to be more susceptible to the disease.

The virus, which is spread through the air and by direct or indirect (i.e. utensils, bedding) contact with an infected animal, initially attacks a dog’s tonsils and lymph nodes and replicates itself there for about one week. It then attacks the respiratory, urogenital, gastrointestinal, and nervous systems.

The best prevention for canine distemper is routine vaccinations and immediate isolation of infected animals. Special care must be taken to protect new-born pups from exposure, since they are especially susceptible to the disease.”

Why Should You Take Distemper Exposures Seriously? Distemper can be deadly. Once neurologic symptoms occur, death and or long term neurologic damage is likely. While there is no cure, quick treatment of symptoms is very important to your pet’s survival.

Protect Your Pets: As pet owners, you should make sure your dogs are up to date on both rabies and distemper shots.

If you are worried about over-vaccinating, you can request titers be taken on your pets. Know they’re expensive and many, like the American Veterinary Medical Association [AVMA] and the American Association of Feline Practitioners [AAFP], don’t support titers alone because a titer only measures antibodies, not cell-mediated immunity, which is the real-world measure of protection.

More on Titers From PetMD: https://www.petmd.com/blogs/fullyvetted/2010/june/titering_or_vaccines-10182

Need low cost vaccination resources for your pet or for someone you know? Click here

SYMPTOMS OF RABIES AND DISTEMPER

Rabies Symptoms to Look For: From the CDC: “Rabies virus causes an acute encephalitis in all warm-blooded hosts and the outcome is almost always fatal. The first symptoms of rabies may be nonspecific and include lethargy, fever, vomiting, and anorexia. Signs progress within days to cerebral dysfunction, cranial nerve dysfunction, ataxia, weakness, paralysis, seizures, difficulty breathing, difficulty swallowing, excessive salivation, abnormal behavior, aggression, and/or self-mutilation.”

Distemper Symptoms to Look For: Distemper symptoms looks a lot like rabies as most people would not notice early distemper symptoms in wildlife. Distemper has several similar symptoms to rabies, and include discharge from the nose and eyes, seizures, coughing, emaciation and unusual behavior. It is not until the animals trend neurologic that symptoms are easy to spot. Most raccoons that are tested for rabies actually have distemper.

From Wildlife Busters: “Canine distemper is the greatest single disease threat to the world’s dog population. It’s highly infectious and it’s nearly impossible for a dog to avoid exposure to this virus. More than 50% of the adult dogs and 80% of puppies that contract it die. Other effects include permanent problems with vision, hearing, sense of smell, and partial or total paralysis. Younger dogs and puppies are the most vulnerable (in wildlife, most cases are seen in the spring and summer, when wild canids, such as foxes and coyotes, bear their young).”  The virus is usually fatal. It spreads through body fluids or droppings from infected animals as well as through airborne exposures like sneezing or coughing.

From PetMD: “The virus, which is spread through the air and by direct or indirect (i.e. utensils, bedding) contact with an infected animal, initially attacks a dog’s tonsils and lymph nodes and replicates itself there for about one week. It then attacks the respiratory, urogenital, gastrointestinal, and nervous systems.

In the initial stages of Canine Distemper, the major symptoms include high fever (≥103.5 ° F, or 39.7° C), reddened eyes, and a watery discharge from the nose and eyes. An infected dog will become lethargic and tired, and will usually become anorexic. Persistent coughing, vomiting, and diarrhea may also occur. In the later stages of the disease, the virus starts attacking the other systems of the dog’s body, particularly the nervous system. The brain and spinal cord are affected and the dog may start having fits, seizures, paralysis, and attacks of hysteria.”

If you see a dog, raccoon, possum, fox, coyote, skunk, or insectivorous bat with symptoms of rabies or distemper, call 311 immediately. DO NOT interact with the symptomatic animal.

If you have been bitten or scratched by a potentially rabid animal, wash the wound thoroughly with soap, monitor the biting animal’s whereabouts, seek medical care, contact your local health department for instructions, and your local animal control officer for assistance in capturing the animal for rabies testing.

MORE PREVENTION TIPS | HOW TO COEXIST WITH WILDLIFE

Want to Know How to Keep Unwanted Wildlife Away from Your House and Yard? Check out 911Wildlife’s tips 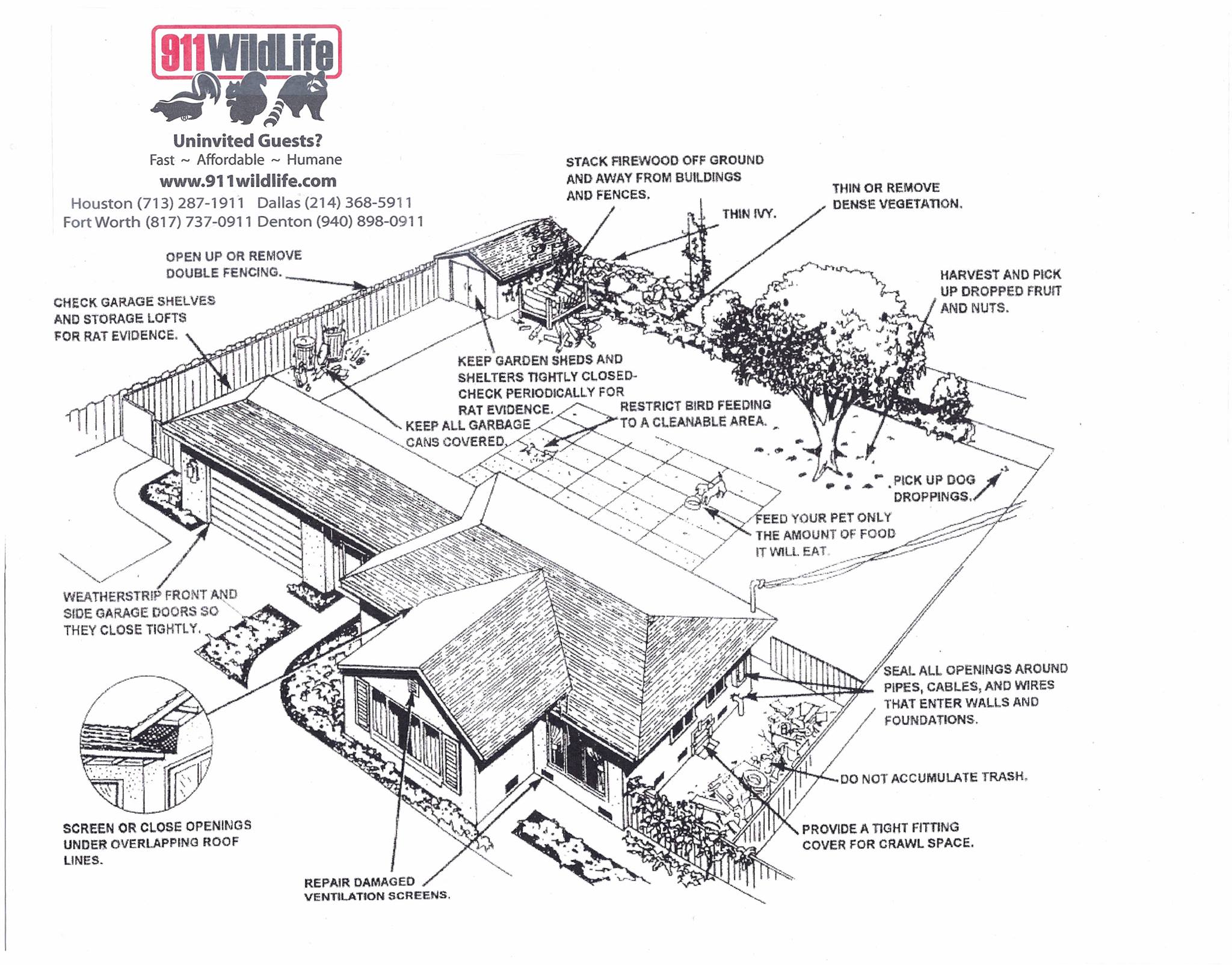