Francisco and Monroe aka Cisco and Chips

I had just cleared all the dogs out of my house and had declared that I was on a dog break. But I just can’t do it. I just can’t drive past dogs in the road. Next to the road, maybe,  but in the road? What if I drove back by later and they were flattened dead in the road. I was raised Catholic, I just can’t deal with that kind of guilt. So I stopped.  Add it to the list of why I am still single. I will load any nasty mange ridden smelly wet muddy disgusting street dog in my car any time. Even on the way to work to run an early morning meeting.  Even on my day to bring breakfast.

My neighbor kept insisting it would be “faster” to take the new bridge to work. Much, much faster. Here’s the problem there, the old route to work had already been cleansed of stray dogs. The new route, taking the “bridge to no where”  is actually a direct route into the district’s feral dog population. So, as it turns out– it was much, much longer.

There they were in my peripheral vision, Mutt and Jeff, in the middle of a 6 lane road. I turned the car around muttering the usual litany of why not: it was already hot and I was going to get my work clothes sweaty and dirty, I didn’t having time for this, they would probably run off anyway, what was I going to do with them if they did come, I was going to be late for work – not a good way to lead by example….

I parked the car in a parking lot of a little business called “Francisco and Monroe” and started off to catch them. The little white one came over and stopped an appropriate distance away. I threw him some taco; he was in. He came all the way over. I fed him some more tacos and showed him rest of the tacos in the car. I could see him doing the math; he was all in.  I scooped him up and threw him in the car with the tacos. The AC hit him and he decided he was OK with the situation. He didn’t seem to want to leave the AC or the tacos, so I left the door open so his friend could see him at the taco buffet.

The big one, Francisco, wasn’t so amiable. He took a bite of a taco and then let me know he couldn’t be bribed. He wasn’t coming any closer. He had some untrustworthy body language.

I have some rules about dog rescue…I won’t chase a dog. The dog has to want to come along. Cisco hadn’t run off, but he wasn’t ready to give up his space either. Good and bad. I had been able to slip leash him, but not able to move him. We had a standoff for about 15 minutes where neither one of us was willing move or to leave. It was only 9am and it was already sweltering hot in the sun. In my fancy meeting clothes, I had had enough of the sun and I was really late for my meeting. I hadn’t checked in with work as the phone was out or reach in the car. It was time to commit. I was either going to be late for work because he ate me and I was going to the hospital or he was getting in the car.

I looked down at him and asked him not to eat me. I grabbed him around his back end and hauled him up into the car with one quick motion.  He really wanted to bite me out of self-defense. He saw his friend, felt the ac, saw the tacos and by the time he had processed it all, I had shut the door. Shock and awe baby.

We drove to work and by the time we got there, they both looked very relaxed. So I did what most normal people would do, I left the two unsocialized dirty flea infested street dogs in my car, with the car running and unlocked (you can’t lock a Prius while it’s running) in the middle of downtown Dallas, and went to my meeting.

I had a plan, I was going to take them to the city shelter after the meeting. But when I came out after the meeting, they were passed out looking super cute and behaved. The little white one was jammed up in the front seat in front of the ac vent passed out.  I thought what could it hurt for them to wait a few more hours and to take them to the vet (40 minutes away) on my lunch break. I could put them in the program, maybe. So weak. So “being on a break” meant doing two dogs at a time. Take aways: don’t take the bridge to work, don’t say you’re on a break, always get extra tacos.

My colleagues were very forgiving about me being late for the meeting, but were pretty mad about the tacos being late until they came about and saw how cute the dogs were all passed out in the car.

Look at those faces – who wouldn’t share their tacos with them? 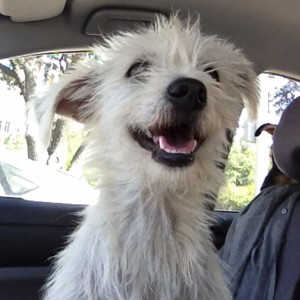 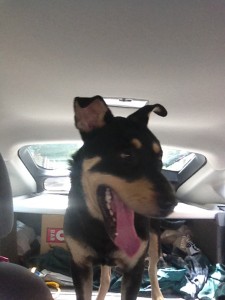 They were both very dehydrated, undernourished, mangy, parasite infested, and Cisco was not neutered. They went into the program. 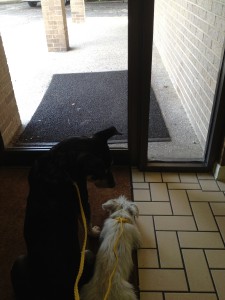 Lobby at the vet clinic

They both had to learn house manners, to be potty trained, crate trained, how to play, walk on a leash, all those good dog 101 things.  We found separate homes for them. Each of them now lives in a family with a dog that is the same size.

Francisco has a doggie sister that he loves to cuddles and play with. 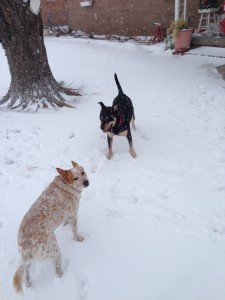 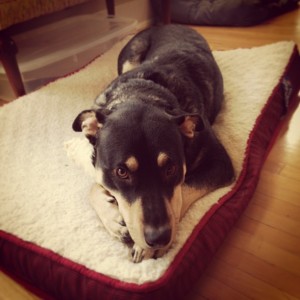 He loves to travel and ride in the truck. He often goes to work with his doggie parents. He is a happy dude.

Monroe, aka Chips, lives with another dog his size and has a toddler to love him and keep him busy. He, like Cisco, often goes to work with his doggie Daddy and is now famous as he made his debut in a Amy Cook & Ben Kweller music video

Both of these dogs are leaps and bounds from the dogs that were found on the streets. Those street dogs were busy protecting themselves from other street dogs, expending their energy fighting parasites and disease, regularly dodging cars on Beckley and Continental, and scrounging around for their next meal. These adopted dogs now spend their days loving, playing, and having no worries.  Their personalities have blossomed and it has been a great joy to see them thriving in a safe and loving environment.

Not long after Cisco was adopted his Mom called me one Sunday, she found two stray dogs in an area close to where Francisco has been rescued.  The dogs were in a field in front of the Clairevista gym across from  the Belmont hotel. My friend couldn’t catch them both, but she caught one.  We had a few options for what to do with the dog, but I told her to bring me the dog.  We named the dog Claire. 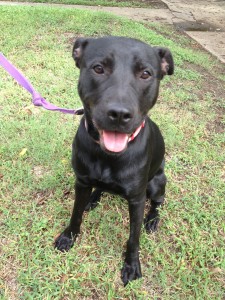 I was so touched by Claire, her disposition, injuries and her story, I took her in to the program. Claire is still with me and is looking for a forever home. Please read about Claire on her adoptions page and on our blog. She is a great dog deserving of a wonderful forever home.

If you see stray or feral dogs repeatedly in the same area, please call animal control (311) and report the animals. Be sure to have a good description and location. Request the “sweep team” or the “rapid response team” come out to try to catch them.  If nothing else, recording the statistics will help the city understand problems in specific areas in the city and that will help them allocate resources to those problem areas.  Together we can make a difference and keep dogs like Cisco and Chips out of the road, off the streets, and in good homes.

You can also contact duckteam6.org for difficult to capture feral dogs. They will not foster or place an animal – they simply specialize in the capture portion. They work with citizens, rescue groups, and the city to capture feral dogs. They will also work with the city to “trap and release” special cases while waiting for arrangements for placement with a rescue group.  Trap and release programs are controversial, but spay, neutering, and vaccinating a feral dog while waiting for placement with a rescue group stops the cycle of breeding. It is an effective stop gap for special circumstances. Please check out duckteam6.org – they are a private group doing some great work in an underserved, difficult area of animal rescue services.

Also, one last little bit of golden knowledge that I learned on this rescue: if you are so inclined to trust the world and to temp fate to not steal your unlocked running car with an unsocialized Rottweiler mix in the back…and rationalize that it’s not that big of a deal to leave it running for three hours because it is a Prius and that the engine wouldn’t actually be running, just the battery – so the engine wouldn’t overheat in 100 degrees and you wouldn’t be polluting at all because it’s a Prius…don’t be so proud to tell that story to your mechanic.  Apparently, one of the worst things you can do to a Prius battery is to leave the car running for a long time. Oopps. But I wasn’t polluting!   Thanks for the tip and for being so understanding Gerald! And apparently it is also illegal. Oops. Live and learn.

And if you ever need a good car / service guy… I know that this a bit of an oxymoron: like fried ice cream or customer service…Best car guy ever – and he is at a dealership, so that makes it even more unlikely: Gerald at Metroplex Toyota is a super duper does what he says he is going to do when he says he is going to do it kind of guy. What’s a mechanic recommend doing at the end of a dog blog? Well, the abused Prius is part of Francisco and Monroe’s story and when you find a good car guy, you should share. Plus, Gerald is a dog lover.