Our city’s animals in the press

We have been struggling with dangerous animal issues in our neighborhoods for years, but in the last several years there has been an explosion to the point of a crisis level that is endangering our citizens on a daily basis.  On this page we have collected articles from various Dallas papers and magazines and made a library of recent and past stories about animals issues so anyone can become informed and clearly see a long standing unaddressed problem. At the bottom of this post you will find a list of city leaders to contact to help us make the change required to address these issues plaguing our City. You can also read about our road map to change via our two Oak Cliff Animal Initiative meetings. We presented a road map in 2014 and 2015.

To start the library off is content that just made the front page Sunday Dallas Morning News. 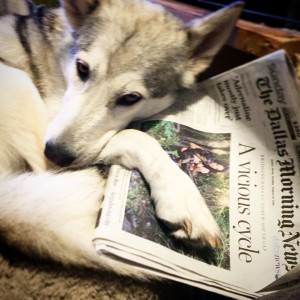 Tasha agrees with the headline – a vicious cycle indeed

Here we go, from the Dallas Morning News:

The city is flummoxed by thousands of loose and abandoned dogs that threaten neighborhood safety and impede revitalization efforts. A drive around poor neighborhoods suggests the city has a long way to go.

Some suburban Dallas County shelters say they operate under a prevailing theory: Dallas’ stray dog problem is spilling into their jurisdictions – but there’s no clear-cut method to determine the origin of stray or abandoned animals.

4 things Dallas can do to stop stray-dog chaos

If you live north of Interstate 30, you probably have a hard time believing this is happening in Dallas. But it is. As a result, both the people and the castoff pets are suffering a poor quality of life. Here’s why you should care, regardless of where you live, as well as four things that would go a long way toward fixing Dallas’ stray dog problem.

“I know just because I’m out here doesn’t mean it’s going to stop,” says Marina Tarashevska, a dog rescuer who works on the gag-inducing front line of the problem. “But once you know this exists, you have a responsibility to do something about it.”

This map shows Dallas zip codes that have had 10 or more loose dog service requests calls to Dallas Animal Services in a fiscal year for the past four years. Click on a zip code to see total calls and view by fiscal years.

Griggs, who represents north Oak Cliff,  says it’s time for the council to overhaul policies dealing with loose dogs. He’s getting signatures to place the matter on next week’s agenda.

Editorials and Opinion
Sharon Grigsby, “Bridging Dallas’ North-South Gap” project editor:
Since the editorial board kicked off our “Bridging Dallas’ North-South Gap” effort in October 2007, residents have consistently told us that loose dogs pose one of the most pervasive quality-of-life challenges to the southern half of our city. Last fall, I committed to digging into the problem and potential solutions. I started by writing blog posts asking residents for their ideas and experiences. Talk about robust, constructive feedback! I credit the readers for what we’ve accomplished so far on this issue.Photos: Stray dogs in southern Dallas need our help

Photos don’t lie, so send us yours of abandoned, stray and loose dogs
I think this visual evidence is the strongest possible way for us to share this issue with all of our city. (August 20)

Winnetka Heights dog attack: scary reminder of why strays issue must be fixed
Yesterday, a horrifying incident took place in Winnetka Heights that illustrates the dog problem better than any commentary from me could. (August 19)

New DAS budget proposal offers clues into city’s plan for strays
Whether you see it the way DAS does or not, the material provided offers a strong defense for why the operation is focused on community education and outreach rather than a “dog catcher” approach. (July 28)

See where Dallas residents rank stray dogs problem — and a new DAS solution
For all of us interested in how to improve the quality of life in southern Dallas neighborhoods where stray and abandoned animals are a huge problem, here are two recent developments worth comparing on the animal-control finances front. (July 20)

Provocative ‘balls are for fetch’ spay-neuter mural too risque for Oak Cliff?
When an opportunity came along to paint a mural on an empty brick wall at a high-visibility spot along West Davis, artists Teresa Megahan and Joachim West responded with a very cool advocacy idea. (June 29)

Mayor Rawlings offers glimmer of hope for southern Dallas’ dog problem
He pledged twice this week – once in an interview with us and once at the public GrowSouth event Tuesday – to fix this problem. (April 30)

Agree or disagree: No solutions in sight for southern Dallas’ abandoned dogs
Solid updates, results or solutions would work just as well as a 140-character tweet – and there’d be 48 characters to spare. (June 5)

Photos don’t lie: Stray dogs in southern Dallas need our help
For those of you who might not yet realize just how serious the problem is, check out this slideshow, which offers a glimpse of the street dogs of southern Dallas. (March 26)

‘Loose’ or ‘abandoned’ dogs? The city doesn’t have a clue which are which
We have a loose dog problem and we have an abandoned dog problem.  And the first problem breeds the second. (March 25)

There’s only one way Dallas will solve its stray dog crisis
Until the city comes up with a strong enforcement plan — and hits people in the pocketbook for irresponsible dog ownership — there will be no change in our dog crisis. (March 19)

‘Smart sweeps’ for dogs and dumped trash in southeast Dallas show some results
The sweeps are focusing not just on trying to catch the loose dogs (an effort that has only yielded a few captured animals so far) but on educating residents. (February 16)

Southeast Dallas dead-dog scene: Will we back up our soft hearts with hard cash?
The Dallas City Council’s Quality of Life panel spent a good bit of its session this week talking about the problem of loose dogs. (February 12)

Dallas dog dumping: City Hall’s response and a busy morning for rescuers
Given the bitter cold temperature this morning, Marina Tarashevska and other dog rescuers were out on the job early in southeast Dallas. (February 2)

Dog dumping in southeast Dallas must stop
If you monitor the Marina’s Groupies public Facebook page, you’ll see that rarely a day goes by that one of the volunteers doesn’t report another one to three dogs (and sometimes many more) abandoned in southeast Dallas.(January 16)

Euthanized Aussies story bad enough without ‘Dallas dog politics’
No word yet out of City Hall or Dallas Animal Services in response to the two questions we asked in today’s editorial related to the Jan. 1 euthanization of four Aussie dogs. (January 7)

Dallas calls it an ‘owner surrender’ case — bad animal rescue story just got a lot worse
Rescuers went to great lengths to rescue four Aussie dogs, which were then taken to DAS with assurances that they would not be euthanized. Somehow, a dreadful mistake was made and the four are now dead. (January 5)

Dallas dogs-gone-wild, continued
There’s just something about our pets that causes nearly all of us to want to do something to help. (2014)

Dallas dogs-gone-wild problem
Is it possible to create and sustain an effective crusade to deal with Dallas’ stray, wild and/or generally neglected dog problem? (2014)

Dogs bit Dallas woman more than 100 times, like they were ‘eating a steak’

Woman mauled by pack of dogs in southern Dallas has died

Floyd: How can a city be ‘world class’ if it has a third-world dog problem?

‘Sweet’ rescue dog never made it to foster home

EuthanasiaCoverage of the accidental Aussie

Coverage of the accidental Aussie euthanasia

Who is Gypsy Dog Ops?

The shelter is full….

To make your views known on the abandoned and stray dog problem, contact the mayor and your council representative. (Don’t know which district you are in? Go to bit.ly/DallasDistricts to find a map.)