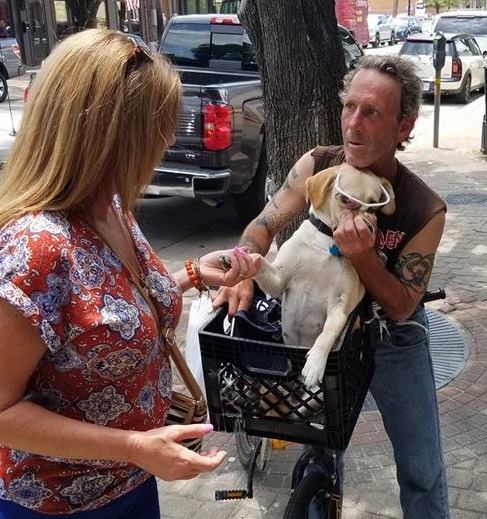 Are you fired up about the dog named Lamb of God, aka Lamby? We are too. Not familiar with Lamb of God? Let’s talk about it.

Lamby was owned by a man, Sean Baugh, who would dress up the dog and use the dog to panhandle people for selfies with his dog. Many people reported him, on social media, abusing the dog but no one ever filed a report with the police. Without a formal report, there was nothing animal welfare agencies could do to remove the dog from the owner and its horrible circumstance.

Over time, Lamb of God became increasingly aggressive with people and she ended up bitting someone. The dog went into quarantine and her owner paid all the fines to pick her back up from Dallas Animal Services (DAS) after the quarantine expired. While in DAS custody, the dog was vaccinated, spayed, and micro-chipped.

Her owner picked Lamby up from DAS and went back to his business of illegally pan-handling with his dog. Not long after, the dog went on to bit a child in the face. The child ended up in the ER and the dog ended up back in quarantine. The child’s parents filed a dangerous dog affidavit and started the process to deem the dog dangerous. The court deemed the dog a danger to the public and order it euthanized due to public safety concerns. (edit -there was originally some confusing information published via news sources about the process. The child’s parents did not file the dangerous dog affidavit. The effort originated with the city. Appeals were filed and an agreement was reached for Sean to lose ownership and for the city to send the dog to Austin Pets Alive for rehabilitation)

Now, it is worth noting that deeming a dog dangerous is NOT an automatic euthanasia. The court has several options to help keep the public safe and keep the animal alive. In Lamb of God’s case, the court order the PROPERTY be destroyed.

That’s right, dogs are considered property in Dallas, Texas. Since the court deemed the dog a danger to the public and ordered euthanized, the city cannot take the dog and rehabilitate it. That would be contradictory to the intent and rationale for the seizure of the property. That is not to say that owners cannot surrender a dangerous dog and that dog be rehabilitated, but an owner surrender is a different circumstance than a court ordered seizure.

So now, citizens are trying to advocate to help the Lamby live through this process. Good idea? Bad idea? We’re not going to debate that here, but what we offer is a little history on our current ordinances and a path to make sure something like this never happens again in the city of Dallas.

Earlier this year, the City of Dallas updated many of the Chapter 7 animal ordinances. During the process of re-writing the laws, the city removed animal registration in lieu of mandatory microchipping. During the approval process, several citizens and advocates, including us, notified DAS and members of the City Council, that they were also incidentally removing ownership revocation mechanisms. With the old law, the Director of DAS could have seized Lamb of God without a court deeming the dog dangerous and in turn, having to destroy the dog. Additionally, and of equal importance, the old law allowed the Director to deny an owner the ability to get a license to own a dog, and therefore, could revoke the privilege of owning a dog in the city of Dallas for a determined amount of time.

Why is that important? We all know Mr. Buagh is going to go out and get another dog and treat his new dog just as inhumanely and he will use the dog to illegally panhandle. The new gap in the law allows him to do that. We MUST CLOSE THE GAP.

When we presented this gap to the City months ago, they claimed the “three strikes rule” would cover revocation needs. The three strikes rule requires three CONVICTIONS of several specific sections of the animal ordinances within a year. Sounds good, right? Not so fast. If a dog owner gets a ticket for spay/ neuter compliance or vaccination, it’s now a “fix it ticket” which means if they get into compliance within 30 days, the ticket goes away. So Sean Baugh most likely got a ticket for spay/ neuter compliance, vaccination, and registration or microchipping. But none of those tickets would have counted as a conviction.

Additionally, counter to what DAS told us about the new law, the Chief Prosecutor of the municipal courts recently shared this with us, “Unfortunately, Dallas City Code, Chapter 7, Article V does not give the Judge the option to limit Mr. Baugh’s future pet ownership.  This option is only available in cases where an individual was convicted of at least three criminal violations of Dallas City Code Chapter 7, more specifically, Dallas City Code Sections 7-3.1, 7-4.1, 7-4.2, 7-4.7, 7-4.10 or 7-4.11.  Dangerous dog hearings and appeals are civil in nature and thus in this instance, the option is unavailable for the Judge to consider.”

Did you catch that last part? “Civil in nature and the option is not available for the Judge to consider?” Three CRIMINAL violations are needed. DAS has the option to write civil vs criminal tickets for all violations, that makes the odds of getting three criminal convictions outrageously low.

Why the city and citizens failed Lamby the dog.

Like many cities, Dallas categorizes domestic pets as property. They are sentient beings. Most think a municipality does not have a right to take a resident’s property or tell them how to care for their property. We use laws that set a baseline of care to help animals be treated humanely, but until we change the way companion animals are seen, they will have no real rights, no voice.

There are other cities that have declared domestic pets as sentient beings, some cities even give the animals an advocate when charges are filed. The Oregon Supreme Court recognizes that dogs are not objects. They’re living beings with emotions that can feel both physical and emotional pain. In Connecticut, courts appoint animals courtroom advocates.

In 2016, Canada, that’s an entire country, declared pets sentient beings.  The Canadian bill gives inspectors the power to demand to see an animal if they have “reasonable cause” to suspect the pet is being mistreated. They can also obtain a warrant from a judge to enter a home and seize animals. Domestic animals in France, Germany, Austria, Switzerland, and New Zealand were all declared sentient beings.

Emotionally charged issues surrounding property rights cloud the arguments, but fact based information and scientific research points to categorizing animals as more than property. Either way, a property designation is never an excuse to neglect animals, nor is it an excuse for the city to fail to provide viable enforcement options to help neglected and abused animals. It is also not an excuse to leave incompliant, neglected, or dangerous animals in homes until they become so dangerous they must be euthanized. 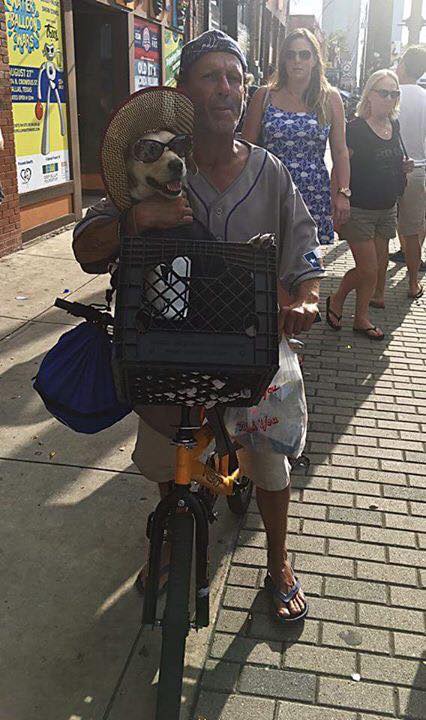 What is Dallas waiting for to declare domestic pets sentient beings? Dallas is waiting for citizens to ask; loudly. As the great Gandhi writes: “The greatness of a nation and its moral progress can be judged by the way its animals are treated.” Let’s leverage these efforts to help dogs like Lamb of God in the future.

Write or call DAS and your City Council and let them know:

That’s it. Funnel your anger and frustration into change. Copy and paste, email, and share. Together, we can continue to elevate the animal culture in Dallas.