Words can’t begin to describe the prostrate frustration that has spun us into a deep, hopeless, depression over the mauling of a Dallas resident by a pack of loose dogs. Our hearts are heavy and our prayers go out to this poor woman and her family as she clings to life.

The Mayor’s and the City’s recent statements in response to the loose dog issues are not alleviating the worry and concern for our fellow citizens’ general safety and quality of life. These statements continue a long pattern of placating empty promises with a lot of talk but no meaningful action and statements that show a general disconnect from the negative reality that is the crisis level animal issue plaguing our southern sector.

We’ll give you an example or two.

THE CITY ON SPAY AND NEUTER EFFORTS: 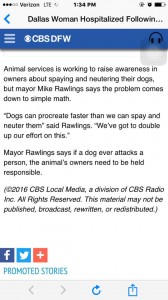 Mayor Rawlings has been quoted as saying the issues comes down to simple math, “ Dogs can procreate faster than we can spay and neuter them….We’ve got to double up our effort on this.”

Those of you that follow me know that I’m not that good at math, but let’s take a look at the statement. DAS’ new “loose dog initiative” plan calls for 40 spay and neuter surgeries a month. Let’s take the Mayor’s statement and double down and make that 80 spay and neuters a month.

There are approximately 90,000 intact animals living in poverty in South Dallas. If the City doubles down efforts and spay and neuters 80 animals a month, as the Mayor prescribed, that will get this emergency crisis situation under control in about 93 years. I feel safer already.

Back in December 2015 at the Oak Cliff Animal Initiative’s Laws for Paws meeting, we let Jody Jones know there was a huge disconnect and issue with dog bite reporting. There is no meaningful system for full reporting and there is no comprehensive system for data collection. There is no communication or coordination between DPD, DAS, the dangerous dog “department”, and hospitals on dog bite reporting. We let her know again in a meeting in March. 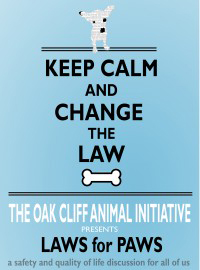 The impact of this chaos is that citizens are left to figure out what to do after being attacked by a dog. Maybe they know, maybe they don’t that DAS is supposed to quarantine an animal for 10 days after a bite to monitor for rabies. Rabies control is one of DAS’ main functions; they should be proactive about this, not reactive.

In this gap, citizens are left to figure out how to get an animal picked up for rabies quarantine and are left alone to figure out how to navigate the cumbersome process of filing a dangerous dog report. Days can go by before an animal with a known address is picked up and quarantined. It is a very broken system lacking in any collaboration and checks and balances to make sure that public safety is priority one.

Additionally, this March we reminded Kris Sweckard and Jody Jones that the system requires an ORR for the dog bite victim to get the owner’s information for the dog that bit the victim. It takes a minimum of 10 days to get back this information. Why is this important? The victim only has 10 days to file a dangerous dog report. You can see that the math does not work in favor of the victim.

Additionally, in March we let Mr. Sweckard and Ms. Jones know that a dog bite victim was having trouble getting his ORR filled. There was no offer of help or any concern for this citizen. This particular dog bite victim has now filed with the Office of the Attorney General so that he can rightfully attain the dog owner’s information for his insurance company.

In the meantime, the dog bite victim’s name and address are open to the public to view. Seems a little silly that the victim’s information is public but the law breaker’s info is not. DAS and Mr. Sweckard were not interested in looking into these process and procedure issues and the matter was closed as far as they were concerned. The public does not consider this addressed or resolved in anyway and the tragic mauling of a south Dallas resident highlights these issues even more.

The loose dog discussion will get a future post of its own. We’re making a timeline of the City’s “efforts” to pick up loose dogs. It’s a long, frustrating journey to today where a Dallas resident sits in a medically induced coma clinging to life. In our neighborhood, we are all aware that in a blink of an eye, that woman could have been or could still be any of us.

This sadness and powerlessness weighs heavily on our hearts. It makes us feel voiceless and dismissed, and at what cost. After years of watching our neighbors, our neighbors’ dogs, and our mailman be attacked and bitten, we always come back to this same simple question to the City, “What’s it going to take for the City take this seriously? Does someone have to die?” Well, here we are praying that someone doesn’t die. And as we always do, we’ll close with this: Mr. Mayor when you are serious about solving this City’s crisis level animal issues, give us a call.

Mr. Mayor, The Dallas Morning News thinks you should call us too – check out #2. They mean us as well as others. This is not the first time the DMN editorial page has suggested you call us. We’re standing by ready to help.