Tasha Wakes up from Surgery

Tasha woke up from the rodeo sideshow day a captured dog. Her prognosis was good, but she was not pleased. She had spent her life making her own decisions and now she was trapped. She was painful, fearful, and looking for an escape. Her infection kept her feeling badly for several more days, but she was on the mend.

We tried to make her accommodations as comfortable as possible, we gave her good healthy smelly salmon based food, we gave her towels to lay on, we gave her rosemary aromatherapy (the scent of home) and as anticipated, she still spent every minute scheming how to get out. 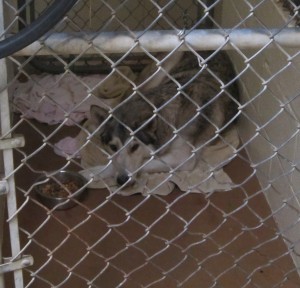 Every good escape artist works when no one is looking and night time was Tasha’s time to test everything. When no one was looking,  she tore up her towel and defiantly stuffed it in the drain hole behind her run, she worked the fence trying to get out, and climbed up the chain link fence to pulled her leash through the roof of the run and then she tore the leash to pieces. She really hated that leash. She destroyed three of them before we got our act together. 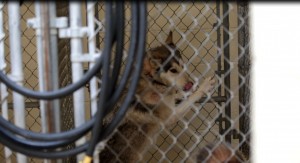 I came everyday and sat in the run with her and tried to restore the trust bank. We took little baby steps. Sometimes she would test me out, trying to manipulate me by giving me a warning signal that she didn’t want to be touched, and when she saw that I wasn’t going to give in, she would let me pet her. 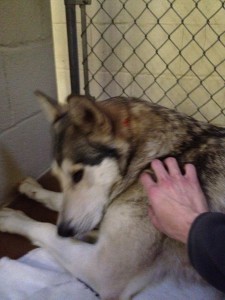 Tasha giving me the stiff necked “don’t pet me” look

She would let me pet her head, but she would still sit back in the back of the run, turn her head down. When she didn’t want to engage, she would turn towards the back, put her head down, pretend to close her eyes, and mope. Which was progress! She was letting me touch her and sit next to her! 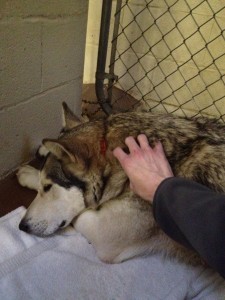 Nelson advised us that in order to really gain trust, Tasha should have a say in the matter.  We had such a horrible time constraint, we probably moved faster than was recommended in an ideal situation – but we then worked harder to take Nelson’s sage advice into consideration and give her a choice in the matter. We worked on getting her more engaged and curious. 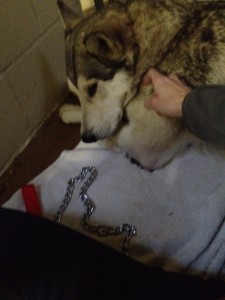 Our next set of goals was to get her on a leash and get her walking on a leash so we could take her outside on a walk. A leash was important to many next steps. We literally started introducing a leash into her environment. We let her see it, smell it, hear it jingle. Everything was scary and new. We slowly started showing her the leash and touching her collar so she would get ready to be leashed.

The poor girl used the “facilities” as little as possible. She just refused to go to the bathroom in her kennel – and without the leash, we didn’t yet have the ability to take her out of the kennel. We also needed to leash her so we could try to get her under control for her second surgery. We wanted to avoid having to catch pole her in preparation for the second surgery. Leashing her would be very helpful.

Below is a photo gallery of Tasha being introduce to the leash in her kennel. The pictures are very similar, but the subtleties show some very distinct signals from the dog. You can see she is still sitting in the back of the kennel and giving signals that she is not comfortable with the situation. If you are interested in that kind of thing – a series of images are included so you can see her reactions. 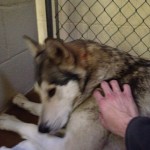 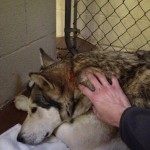 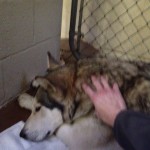 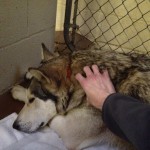 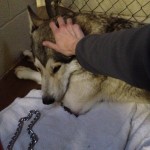 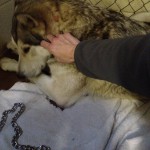 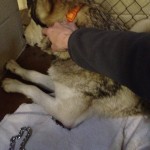 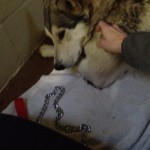 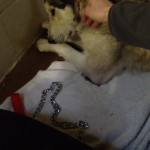 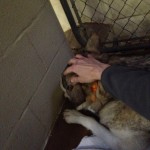 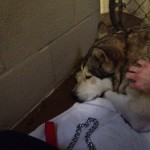 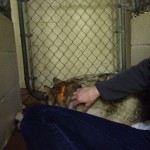 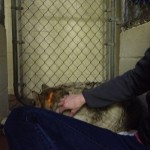 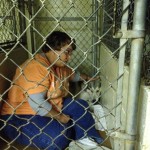 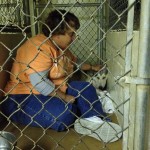