Our first planned pack walk with Tasha was thwarted when Nelson came down with the flu and had to cancel at the last minute. I was pretty disappointed, but took the opportunity to practice around the neighborhood just hanging out and interacting with people. I have some great neighbors that are invested in Tasha and willing to patiently and quietly sit with her while she learns that people can be trustworthy. We spent the afternoon walking around the hood and hanging out with various neighbors. Tasha made great strides and would eventually approach her new friends with caution and curiosity. 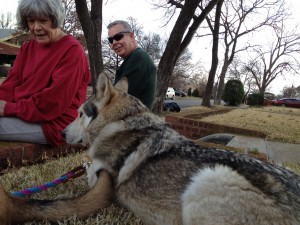 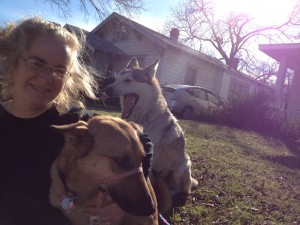 Our second attempt to attend a pack walk was thwarted by a suspicious husky. Never underestimate a cognitive dog’s ability to Vulcan mind meld with you. Tasha knew something was up. Maybe we were telegraphing it, maybe Chankla was telegraphing it, but Tasha was having nothing do with it. She realized that Jacky was in the house and she would not come in the house.  It’s not that she doesn’t like Jacky, she does. It was just a new experience for Tasha to have to come in the house when someone was there.  She had always already been in the house when Jacky arrived. That had not even occurred to us.

There is no catching Tasha in the back yard, so when it was time to leave, we were doomed. We tried tricking her with her biggest weakness: bologna. No go.  With treats of every kind, with Jacky going inside, outside, fake leaving. We even left and went for a walk. She just wasn’t having it.

Tasha really didn’t want anything to do with us if it meant coming in the house. Tasha is really good at hiding in plain site when she wants to and she wanted to. She jammed herself in a garden box and was trying to use nature’s camo to be invisible.  It was hard not to laugh at her because she was way too big for the spot she chose. 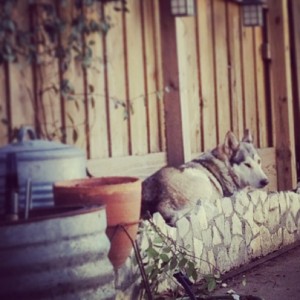 After 4 hours of shenanigans, Dr Jacky went home for the night. Two minutes later, that darn dog came in the house. How did she know she was GONE gone?
Here is the email update Dr. Jacky sent Nelson once we realized we really weren’t going to make it to the walk.
“Nelson,
Well, we had a fail for getting her to cooperate today, but we can solve the problem easily next time, so we will all probably see you at the next pack walk.Basically I had come over to Fran’s house much earlier today around 11 am so we could work on some things for the upcoming presentation over the darting and trapping procedures, etc etc.  Tasha has been relatively relaxed when inside the house with me before, but we just failed to take into account that she might not choose to come inside when I came over.  Every other time she has already been in the house when I entered. That was our bad.Fran can leash her without any issue when she is inside, but she cannot do so when she is loose outside.  And Tasha still mostly chooses when to come in or stay out with some exception.  But basically you cannot just walk to the door and command her entrance.  She has learned to cooperate with routine house routines about times to go in and out, but just not yet to the point you can reliably encourage her to go one place or another with real surety – as you can see today.She just refused to enter the house at all today.  So that pretty much put the stops to the rest of the plan. She ferreted out that something was up and that was that.  Next time, we will make certain that she is inside before I ever even arrive, and we will be good to go then.Sorry we did not get to see you.  I was looking forward to it, especially since I missed the lunch the other day.  But soon hopefully.  Fran is working more intently on having the dog follow her while attached to a short leash all over the place, and that seems to be working through some more of the basic skittishness. She told me today that while inside and laying down, Tasha will let Fran step over her to move on through the area, rather than leaping up and running off.  So little by little she continues to adjust and adapt.Mostly I have to say I am still tickled that the dog has not been able to escape the backyard yet. I feel that makes me a certified genius in combating escape happy dogs now.  Not that this is a particularly useful skill I suppose, but one should take measures of genius wherever they crop up I think.
-Jacky” 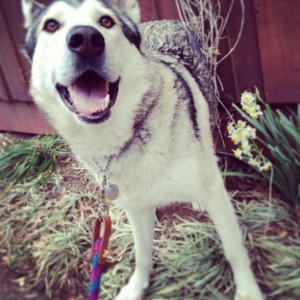