Tasha marked her 6 months anniversary with us with a big public adventure. Dr Jacky and I packed up Chankla and Tasha and took them to Earth Day in Oak Cliff. We knew it was going to be a stretch for Tasha, but we hoped having Chankla with her would help get her introduced to large active crowds and lots and lots of people in her space. We agreed that if it was too much for her we would take them back home.

Just getting in the car with Dr Jacky was enough to get Tasha nervous with anticipation. That dog has a memory like an elephant. She remembers who suspiciously jabbed her with needles before her surgeries. She has had fun adventures with her Auntie Jacky also. Her back end was shaking the entire car ride, but she looked relaxed enough and in no way genuinely distressed. I equate her nerves to what used to happen to me as a kid when I would climb the high dive at the pool. I would shake and be so nervous, I would want to back out, then I would jump and next thing you know I was in line again!

The first big hurdle was walking the dogs across Zang and Colorado to the park. It is not in a street dog’s instincts to use the cross walk signals to cross the street, but Tasha trusted me to keep her safe as we crossed the main roads. 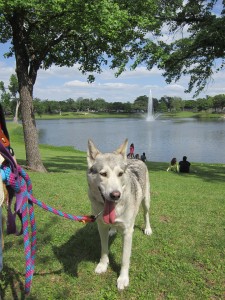 As we walked into the controlled chaos of the park, Tasha was nervous with anticipation but taking Chankla’s cues that this was a party. We stopped to let the dogs take in the environment, all the activity,  and to rest their little minds. We took advantage of the photo op. 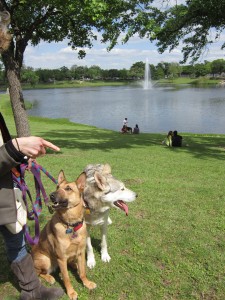 We walked all around the park past other dogs, kids, people, food truck, musicians, artisans, and informational booths. The dogs stopped and talked to neighbors, total strangers, and several interested kids. 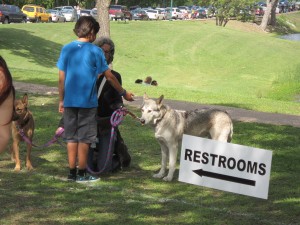 Tasha plays the statue game with a new friend

Tasha’s first sniff and lick came towards the end of the day. A very nice young man agreed to play the statue game with her and she took to him right away. The first stage of the statue game is “I ignore you”, which Tasha is doing in the picture. When you pass the ignore test and play the statue game with her,  she will make the initiative to approach you. Our young man passed the test and as he stayed still and left his hand in position, she sniffed and then licked him. He got a big broad smile on his face when he learned that he was the first person that she licked. 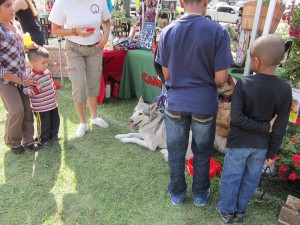 We spend some time hanging out talking in the Camp Bow Wow booth where more kids were drawn to Tasha.  Kids really want to pet her.

We practice walking with people in her space, with dogs near by, up and down stairs, it was just a big fun exercise in conditioning. 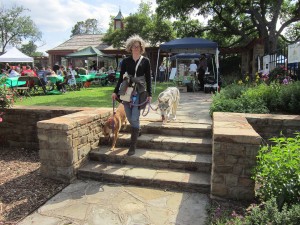 But the best part was on the way back to the parking lot. We were walking down the road and all of the sudden the disconcerting sounds of motorcycles can roaring up behind us – lots of them – so dramatic. But it was the Elvis-es! They zoomed by and we all recovered quickly. When we rounded the corner into the parking lot – there were the Elvis-es! What’s better than a wild dog taking a photo op with Elvis? A wild dog taking a photo with a bunch of Elvis-es!!! 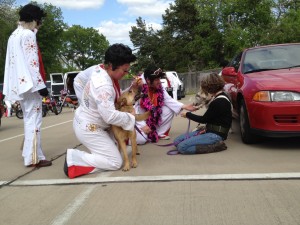 You ain’t nuthin’ but a hound dog!

Turns out the The World Famous Wheelie-ing Elvi are dog lovers. Elvis (Chris) spent some quiet time with Tasha and before you know it  – Chankla was wearing Elvis’ sunglasses and Tasha was an Elvis fan.

The dogs had a good time. Tasha was pretty excited to cross the threshold back into her house. Just like after our last day trip, after getting home and getting off leash,  she was  a little jumpy and overly dramatic. She almost reverts backwards with her socialization for a little while as she is unsure as what might come next. I  didn’t push her and gave her some space to relax in the back yard. I figured she would be back in the groove by bedtime. The wild dog likes a regular schedule. Chankla on the other hand, is up for a flash mob doggie Elvis party anytime!ards 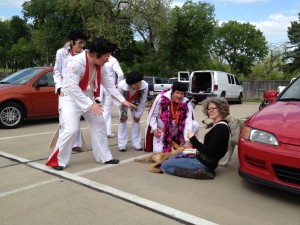 When it was time to go to bed, Tasha doggie knocked at the back door letting me know that she was ready to come in. I went outside to see her and she gave me and the other dogs the biggest, happiest, most playful greeting to date. I gave her a big o’l doggie massage and I can’t say that I have ever seen her  look happier or more engaged. Happy doggie domestication-a-versary Tasha! 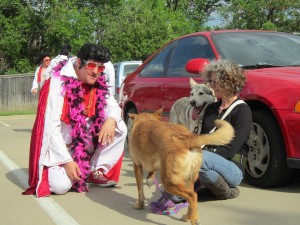 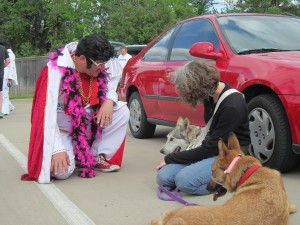 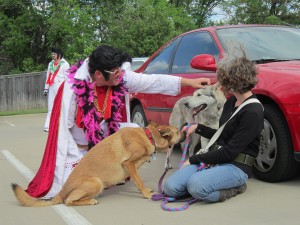