It’s tornado season and in all seriousness, you should have a sheltering plan.  And more generally, you should have a disaster preparedness plan.  The SPCA and the Red Cross both have  great plans for disaster preparedness for your pets. The Red Cross even makes a printable check list. We have seen the need for this kind of planning during tornadoes, wild fires, and the tragic gas explosion in West, you just never know – so have a plan that includes your pet.

Last night 12 tornadoes rocked our area, including an EF4 twister that claimed six lives in the town of Granbury. During the bad weather, the weather man gave great tips like: “when you know a storm is coming, make sure you are dressed in a manner that is appropriate for you to end up outside”.  For example, have on shoes. If a tornado hits, you don’t want to walk around in rain, broken glass, and debris in bare feet.

So that made me think more about who is going to evacuate with me. The dogs always take shelter in the bathroom/ bathtub with me, but I have never thought about the next step if something really happened. The more I thought about it, I decided to leashed them all. Maybe that is a good idea, maybe bad. But it keeps us all together. The way I imagine it, we would stay together during any possible panic and then evacuation.  If you don’t want to leash your pets, have leashes easily accessible and ready to go. 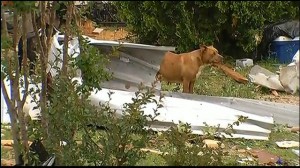 Another good reason to keep the dogs close by is many pets consistently tell us when it’s time to take cover.  It’s no replacement for keeping up with the news, weather aps, and weather radar, but it’s an additional resource of sorts. Yesterday when the National Weather Service cancelled the tornado watch, my dog did not agree. When I was ready to get out of the bathtub because the weatherman had given the all clear, Chankla was noticeably nervous and not ready to move.  We stayed put. As the storm was approaching and when it was overhead, she already knew what the weather service was analyzing:  the circulation was right over the house!  The tornado sirens started going off again. The dogs know!  We have a new official thing at our house: Dog-dar.

At our house, we have practiced with a few real life drills and have a tornado plan to get everyone into the bathroom for safe cover. The first time Pit Bull and Chankla had to take shelter from a tornado in the bathtub, it was TOTAL CHAOS.  The sirens were going off, which is a pretty upsetting to dogs in general, and I was dashing around the house in a panic collecting thing.  I needed the radio, the flashlight, where are the batteries? oh wait – where’s my phone? The herding dog was trying to keep up. They followed me in and out of the bathroom as I collected all the emergency items  and finally we ran in to the bathroom to take shelter.  I started to climb into the bathtub with all the stuff PANICKED that there really was a tornado and I was taking too long to get it together. I turned around just in time to see both the dogs slamming on the breaks at the sight of the interaction with the bathtub.

Oh helz no, there was not going to be any emergency bath! They both turned and ran out of the bathroom.  The sirens were blaring, winds, hail, adrenaline. I tried to calmly coax Pit Bull back into the backroom all while I thought we were going to die. Pit Bull was having nothing to do with it. She made herself a boneless pile on the floor; she was not having an emergency bath.

I try really hard not to traumatize any of the dogs that have been abused. I don’t yell or manhandle them. But when I weighed Pitty getting sucked out of the house by a tornado against being traumatized by me dragging her into the bathroom to safety, dragging won.  She was traumatized, her feelings were hurt and she sulked to the sounds of the sirens from the safety of the bathroom. 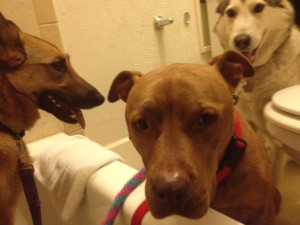 Once I got in the bathtub, Chankla jumped right in like she was getting in the car to sit next to me to go for a car ride.  All that drama and bam – she was sitting in the tub next to me having fun.  Pit Bull never got over the idea that it might be a trick, she sat next to the tub with her head on the edge of the tub moping.

That was our first emergency shelter drill.  The next time the sirens went off, Chankla jumped right in the tub like a trick pony. Pit Bull was compliant, but still suspicious of an emergency bath. We had a pretty active tornado season that year and they are now seasoned pros.  They know just what to do when the sirens sound. 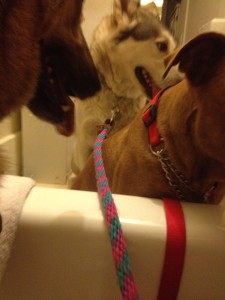 So much panting, so little space

Yesterday was our first “emergency bathtub shelter evacuation” with Tasha. Thank goodness she has never had a bath, so she didn’t know what the tub was for.  Tasha seemed to like the idea of getting in the smallest possible space available and laying low until the storm and the sirens had passed.  Normally, the small bathroom is her least favorite place, but I guess even dogs have different needs in an emergency. When we were all packed in there, it kind of looked like a doggie clown car.

Spring is also a good time to make sure your dogs are collared, chipped, and their chip info is up to date. When natural disasters hit, shelters and volunteers work hard to reunite lost animals with their owners, but the shelters are often overwhelmed by the magnitude of the tasks at first. Microchipping makes all the difference for a quick return.

Plan ahead, stay safe, and look for Dog-dar coming soon. I think we are really going to make an ap that is called “Dog-dar”. Tasha is 100% accurate with her rain forcasting abilities and Chankla can apparently forecast tornadoes – we just might make our millions yet.