We caught the sick black mangy dog this morning. Here is an update on his capture, his status, and his condition.

First, I’d like thank to all the neighbors that stopped to talk to us about the dog while we were driving around looking for him. It really helped us locate him. Thanks to Rick, who already had a relationship with the dog, for helping us get him in a confined space so we could safely sedate him and try to capture him. We appreciate the opportunity to collaborate with the neighborhood to capture the dog in a humane, behaviorally sound manner – which is not always the case when DAS is involved.

And Rick, thanks for the Starbucks – one sip and I was motivated to make some quick moves with that slip leash.

Another thanks to Rick for finding the dog a fairy godfather to help take care of his vet bills and to Arapaho Road Animal Hospital for their generous discount on services.

Here’s how the capture went down: We found him lying on Rick’s porch. He was not that interested in taking treats from me, he definitely remembered me from our encounter the other night. Rick leveraged his relationship with him and with his dog and got him to follow him into his back yard. Once the dog, who we are now calling Sombra, was in the yard, we all just hung out. We tried to feed him a pill pocket with a sedative, but he wasn’t interested. We change our treat. Magic cheese was the winner – he ate the sedative. 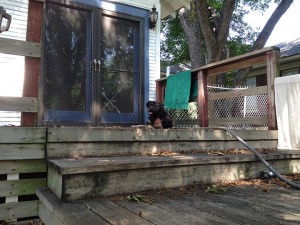 From there it was going to take 30 minute for the sedative to kick in, so we just sat back there in the yard with him getting him conditioned to us. He let me pet his head and he drank some water and allowed us to stay pretty close by. We finally decided he was sedated enough to trap him up on the deck. We didn’t think he would be coordinated enough to get off the deck, but he did. Some quick moves with the slip leash by the fence and we had him. That was followed by a quick move with the catch pole and that closed the deal. Now he could not bite the leash off like he did the other night, although he sure tried! He bit the heck out of the catch pole. He broke a tooth on the pole. 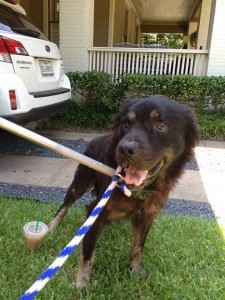 Dr May was able to quickly jab him with a sedative in the butt with our home made syringe pole, but the needle bent (note to self for next time – heavier gage needle) She did manage to get enough sedative in him for him to start to calm down (after a little protest). We gave him a second shot and he was out like a light. With some help from the neighbors, we loaded him up in the car and took him to the clinic. 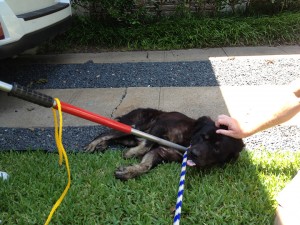 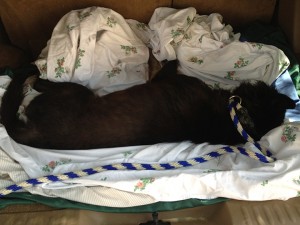 At the clinic, Dr May assessed him, vaccinated him, treated him for his flea infestation, treated him for mange, treated his eyes, gave him a steroid and an antibiotic for his skin, and scanned him for a chip. She also heartworm checked him. As we feared, he is very, very sick and has an advanced case of heartworms. Dr May checked in on him later in the day and he was awake and calmly enjoying the comforts of climate control and being flea free.

Please understand that this dog was probably a month or so away from a slow, horrible death from complications of heartworms in combination with the summer heat.

Below is Dr May’s assessment of the dog. “My formal assessment of Rott mix. At least 5 years of age, heavy wear on his front teeth from fence or chain chewing over the years. Broken left upper premolar that needs to be extracted. Intact male, needs to be neutered prior to release to foster in the event he escapes. Has some likely benign skin masses along back that are not beautiful but are not any immediate harm. Has generalized hair loss and very thickened chronic allergic skin disease over rump and tail head. Covered in fleas. Deep and superficial skin scrapings were negative for Demodex or Sarcoptic. Fleas were treated and removed, medication was applied that will kill any possible Sarcoptic mange mites or ear mites present and continue to provide flea protection for the month. 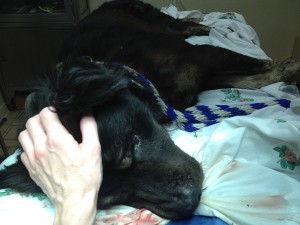 The dog is thin and malnourished, appears to be potentially anemic. He is positive at a high burden for heartworms. His lungs are harsh. This dog is very likely on the verge of severe complications from his heartworms. Everything can be managed, including the heartworm disease. HOWEVER, this is NOT a simple mild case of heartworm disease. I come from an area where we used to deal with this level of heartworm disease weekly, and it is not a small simple task for the owner/foster to agree to. This dog very likely would have died in August or shortly afterward from his heartworms if left untouched and untreated. This will be a significant commitment of time and effort on someone’s part to develop trust in this dog AND be able to routinely medicate him as well as keep him closely confined for a two phase heartworm treatment which will need him to be reasonably exercise restricted for 60 days at a minimum. It will be very difficult for this dog to endure the inflammation that occurs after a heartworm treatment outside in the broad heat of late summer. Which means that likely this guy will be an even longer time commitment from someone until fall when the heat lets up and he can be kept confined outside in a yard after his treatment periods. 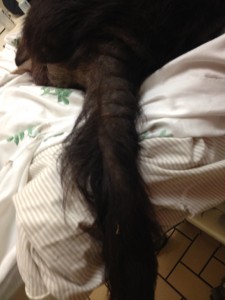 If there is no foster immediately available that is willing and able to commit to handling this dog during a heartworm treatment then it would be more appropriate to put this dog to sleep than force him to suffer a death to advanced heartworm disease.”

That’s the end of her formal assessment. What this means is that if he doesn’t have someone who would be willing to confine him, potty train him, condition him to a house, a crate, walk him several times a day, and deal with his treatment regiment, he will be humanely put to sleep. Normally, I do not advocate for putting a dog to sleep, but in his case, it might be best. Many dogs are routinely treated for heartworms without any problems; but his case is so advanced, it will take a very committed foster or potential owner and months of dedicated care, above and beyond what it takes to keep a normal healthy socialized dog, to see him through. The process is not without risk of complication at his advance stage of disease. 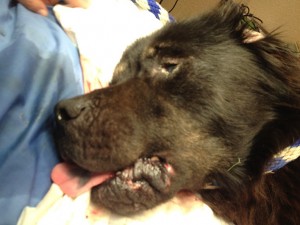 We will need to have a commitment by Tuesday of next week to continue forward with his treatment or we will make the humane decision to help him over the rainbow bridge. Please understand that if we make that choice, that he will be better for being picked up and treated today. He already feels better in the environment he is in. He will pass comfortably in a loving, caring place instead of suffering a very ugly and painful death on the street. Do not be frustrated by the choice to humanely end his time with us. He is very, very sick and has been very sick for a long time.

Please let me know if you, or a rescue you know, are interested in making the commitment to trying to rehabilitate this very sick dog.