As I walked through the backdoor of the office with a small kennel, a small dog collar, flea spray and some other misc dog paraphernalia I realized my underground dog rescue efforts weren’t so underground anymore. A few weeks back the universe had told the dogs where I worked, and now it seems the CEO knew exactly who to call, out of his 300+ employees, for help with a dog. 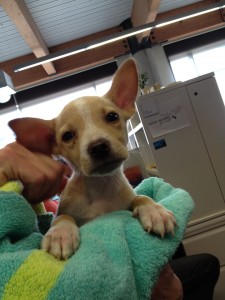 I met up with the puppy at Anita’s desk. She had him a in a big box, he had a make-shift blankie, he had water, and had just finished eating a wonderful breakfast of scrambled eggs – he was set up and living large. Poor baby was covered in fleas.

By 9 am the rumor of a puppy in the building was spreading like wild-fire. He was a full on celebrity. People were doing purposeful drive bys, they were prairie doggin’ as we walked by to go downstairs to my desk. By 9:30, he had a website and a video (nice work Miles).

People were so happy to see him. This was the first of many signs that we REALLY should have a therapy dog day every once in a while.

I took the puppy downstairs and doused him with flea spray. When he looked good enough, I took him up to Bob’s office to check in. I briefly explained to him that if he wanted me to take him into my underground rescue program there would be some simple steps. I explained to him about our philosophy of charging an adoption fee. If a potential dog owner can not swing $200 for a dog that has had all its shots, will be spay or neutered, dewormed, heartworm checked, is microchipped, comes with a clean bill of healthy and all it’s vet records – then they will probably not be a good dog owner. Dogs are a good 10-15 year financial and emotional commitment, we don’t want our potential forever families to take that lightly.

Bob then asked what happens if the bill is larger than the adoption fee, I told him that I usually pay the balance. He very thoughtfully said that they would cover any additional expenses the puppy had. I also told him that since he was a little street puppy, we would want to be sure he didn’t have any bad puppy illnesses, so we would probably have him spend the weekend at the clinic.Has asked me if I needed money to take to the vet and he looked very surprised when I say no, that the vet let me run up a tab and pay it when the dog was adopted. It’s an awesome set up.

Next Bob suggested we get marketing to make him up a little flyer that we could email to the firm once the doggie got his check up. I think that poster was ready before I got back to my desk! It’s awesome, right? 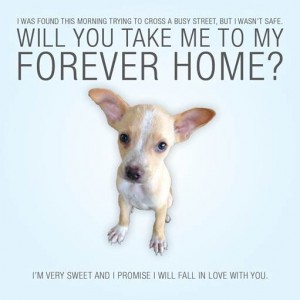 The last piece of business was his name. Of course his name had to be Jack, after the company’s founder, Jack Corgan. 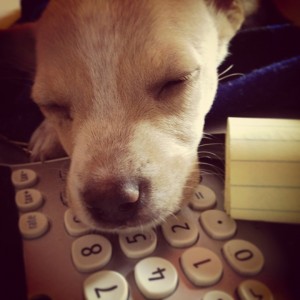 So Jack went downstairs with me and began waiting for his vet appointment later in the afternoon. He went on a tour, an interview, he went to meetings, he put in requests with accounting, he was a good quiet little helper – he was passed out asleep all morning. Everywhere I went, people were SO happy to see me. It was not the puppy I was carrying, I’m sure it was me. This contagious happiness is another reason we should have therapy dog day – I have never seen my team so happy. 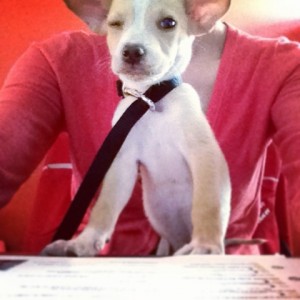 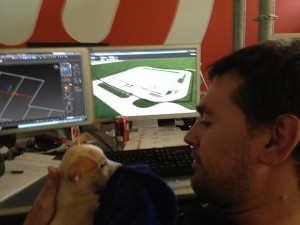 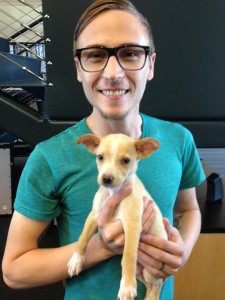 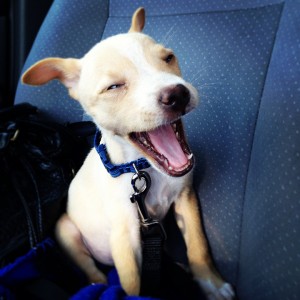 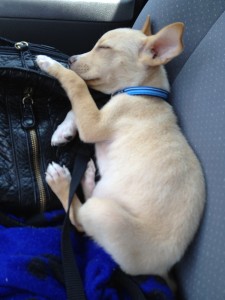 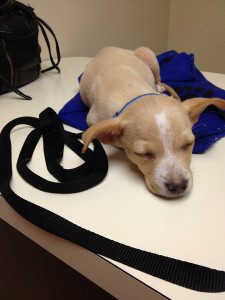 Next we were off to the vet. He like ridding in the car just fine – it was another opportunity to take a nap. Jack was a champ at the vet. He was treated for round worms, ear mites, mange (it was questionable so we just treated for it), and fleas. He was given his vaccinations and sub cutaneous fluid for his dehydration. (he did not enjoy the sub q fluids, but boy did he feel better later!) He had his ears cleaned and he had a manny petty. 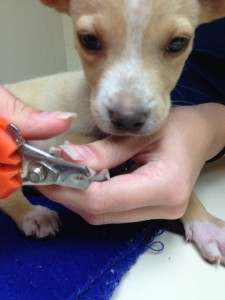 We decided that the range of Jack’s breed and age is: a 5-6 week old 40-50 lb dog (when he is grown) or a 10 week old Chihuahua mix. His bone structure is already too big for him to be considered a Chihuahua. Our best educated guess is that Jack is a 7 week old 30-4o pound Terrier mix. We will have a better gauge of his ulimate size after we see how much he has grown in the next two weeks.

No matter what his age, poor Jack was too little to be out in the heat fending for himself. He was so sick and weak from the dehydration, we want to observe him for a few days to make sure there wasn’t anything outside of the dehydration effecting him. We decided to have Jack stay at my house over the weekend so he could be observed and we could make sure he was getting enough fluids. He would also have an opportunity to party with other dogs.

Jack was very lucky that Anita found him when she did. He would not have lasted the day out in the heat. When we got back to the office Jack spent the rest of the afternoon sleeping and being adored. A waiting list started with people who want to adopt him. We will update everyone on his status on Monday. 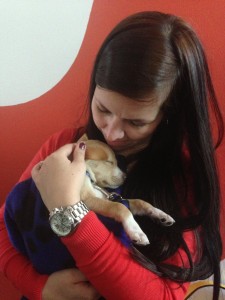 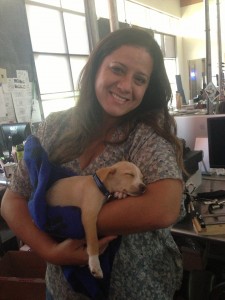 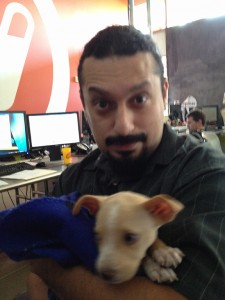 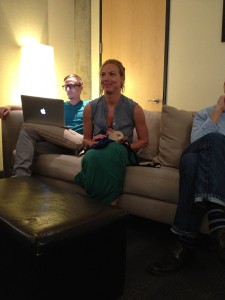 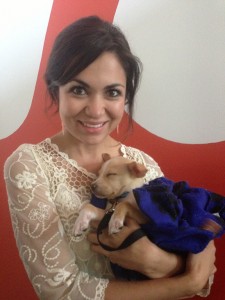 I heard an inspiring quote from a little 9 year old girl last night: “‘Compassion is not compassion without action, it’s just feeling sorry for someone.”  Believe it or not, not everyone would have stopped and pick up that puppy. Anita is Jack’s guardian angel and Bob is his Fairy Godfather. This tiny sick puppy had buy in to help him the minute he hit the front doors and that caring spirit is what makes Corgan a beautiful place to work.

Corgan is celebrating their 75th year in business with a year long community service program called “75 Day and 75 Ways”. It is an effort that both honors and continues Corgan’s service oriented heritage. It is an amazing diverse effort that ranges from collecting used eye glasses, to mentoring kids, to blood drives, to repairing houses. I am proud to be a part of a company that encourages and fosters a culture of giving back to the community they serve. “75 Days” is well under way and today I met the 76th way, his name is Jack. Thank you everyone for giving Jack a chance.