After almost a month of being lost, Vern is back home.

After almost a month of being lost, Vern is back home. His owners had just moved into the neighborhood when Vern the kitty bolted out the door. And from the dramatic beginnings of that great escape, Vern became a neighborhood celebrity of sorts.

What’s a cat doing on a dog blog? Vern’s story is about knowing what to do when you lose your pet.  I have seen lost pets come and go over my years in the neighborhood, but very few people have worked as hard as Cayce to get their pet back. She did everything right and she was rewarded for all her hard work. 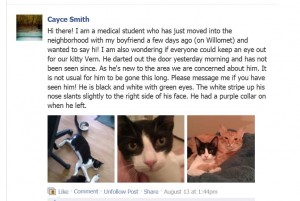 First, Cayce posted on neighborhood websites. This in turn had the neighbors all looking out for her kitty.  Finding Vern was no small task. Looking for a  black and white tuxedo kitty in THIS neighborhood is like saying meet me at the taco stand and then saying it’s on Davis.  Asking if anyone has seen a new cat in the neighborhood cat colony is like asking did the sun come up today? 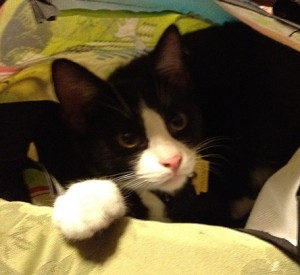 Kitty that was found and rescued around the time Vern was lost. It’s not Vern, it’s Clancy!

I’m going to start a post called, “neighborhood black and white tuxedo cats that look like Vern, but are not Vern.  After many false identifications, Vern was finally verified and found.

Kitties are often found close by hiding in the bushes.  When cats find themselves in unfamiliar places (for an inside kitty, this would be outside) they usually become scared and hide.

The longer the cat is gone, the further away it may be. This was the case for Vern. Statistics show most owners don’t start looking for their cat for several days. It’s important to get the word out immediately. Here are a few tips on how to get the word out about your lost cat:

Distribute fliers in your neighborhood 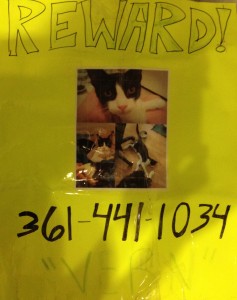 Cayce’s poster was laminated with packing tape and ready to withstand the elements. After a month, the sign was in good condition and still legible and in place on the telephone pole on Tyler Street.

Time is of the essence for many reason. Get started right away! For more information on what to do when you lose or find a cat, visit these links:

Vern’s return was in no small part to all the posters that were put around the neighborhood,  the pics of him posted on facebook, and to the caring hearts that make up our neighborhood. Another very smart thing that Cayce did was chip Vern. If Vern did not find his way home, eventually, Vern probably would have been trapped by one of the neighbors and put in a Trap, Neuter, and Release program. Once at the vet, the vet would have found his chip and he would have been returned to his owners. MicroCHIP your pets and advocate for TNR programs – the process has a high potential to reunite a kitty with their owner!

We did not need to TNR Vern, as Vern’s story ended with neighbors helping Cayce finding Vern. We were all crying our eyes out when the news got out and the pictures of Cayce hugging Vern circulated. As one of the neighbors so aptly put it: “Happy ending. Welcome to Winnetka Heights Cayce Smith. This is our “hood”.