0
by Dog Lady
Like migrating grackles or monarch butterflies, just like clock work every fall, the Gypsy Dog Ops pack that started it all, comes home. If you followed Tasha’s pack story you know that she and her pack camped in my yard two years in a row. Last year, we caught most of the pack. We were down to Tasha and her last puppy. Things were complicated, we caught Tasha and missed the puppy. We had great hopes to find her, but after a few days without Tasha, she stopped coming back. 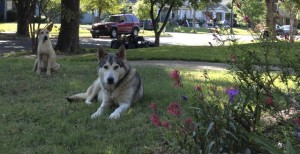 The second year the dogs showed up and made camp on our block, specifically in my yard, I thought it was strange. But this third year, I had to ask an expert WHY? I reached out to
Nelson, our friend 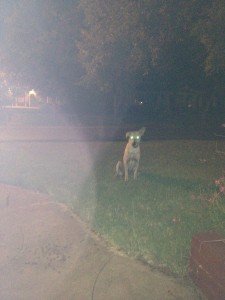 and dog behaviorist, otherwise know as the Husky whisperer and he shared: “Change of weather. All animal have an internal “time clock” in the lower center portion of the brain. That time clock regulates the rate at which we process the passing of time, both in real time (how we experience the pace of time each day), and how we sense changes in seasons (hours of daylight, temperature changes, angles of the sun and shadows, etc.). They return to familiar territories during certain times of the year, depending upon the resources itching the territory. From birth, their territory is imprinted upon them by the pack. One of the most stressful and threatening things to animals is having to change a territory because of the unknown.”
Last year the pack had two puppies that looks exactly alike –  down to the floppy ear. They were nicknamed Number 1 and Number 2. Number 1 was ironically, the first dog to be trapped. Number 2 was the last remaining puppy when we captured Tasha. 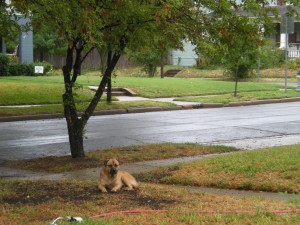 Number 2 has grown up to look like her father, nicknamed Trapbreaker. He was compact, strong and stubborn enough to break at least 3 city traps. Number 2 has also inherited her mothers’ smarts and ability to steal a food dish and slink off with it into the bushes. There is one thing that time has not erased for both Tasha and Number 2 – they both still love garlic bologna. 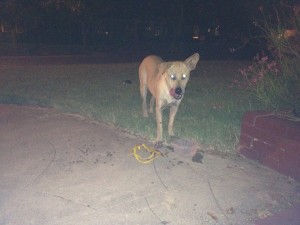 I guess I am going to have a dog trap in my yard again for Halloween this year – maybe this year I’ll decorate it! If you are interested in adopting Number 2 once we catch and assess her – let me know. Mika (aka Mija) was about the same age when we captured her and she has turned out to be a wonderful family dog. 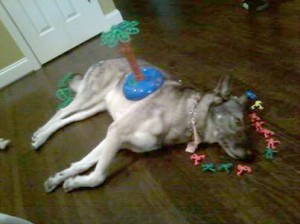