The School Project | Beckley the Dog

Last night as the cold winter dusk was setting in, I sat on the Barbara Mann school property at the end of a catch pole with a scared aggressive dog. It was the first day back from Christmas break for the teachers, and as several of the teachers came out and were on their way to their cars, they saw that I had caught the dog on a rabies catch pole.

As they came closer, I asked them to stay back as the dog was agitated. As ALL animal people tend to do, they kept coming under the assumption that the dog knows them and likes them and therefore it would be ok. Well of course, that upset the dog, which in turn upset the teachers to see the dog agitated on the end of a rabies catch pole.

Understandable, the teachers started in with the 100 questions all while I was trying to hold and keep the dog calm, “You are not going to take the dog to the pound are you? We’ve been feeding her and were going to catch her and take care of her. One of us was going to adopt her” The accusatory questioning went on for some time and then one of the teachers asked indignantly, “Who are YOU?”

I replied, “I’m just a citizen, a neighbor, who has also been trying to catch the dog for a month. I’m the one who spoke with your principal and had the city trap dropped on the playground.” My credential was not impressing them.

I tried­ to explain that I was just as invested in the dog’s outcome as they were and that any one of them could go to the shelter and adopted her in three days and they all could help her in the meantime. They could fundraise for her, or visit her, or pre-adopt her. The questions continued, “What rescue are you with?” To which I replied, “I’m not with a rescue, I’m just a citizen.” They were clearly suspect of this information and my motivations.

There was conversation about how the 7 of them had been helping the dog and there was more displeasure about my choice to catch her. I told them again that they could foster or adopt her. To which one of them replied, “well you know, we all already have lots of pits in our houses and we can’t really take anymore”

The ladies went on to argue how they were going to take her and I offered to put her in anyone’s car who wanted to take her this very minute (as she snarled an bucked about every 2 minutes) as I reminded them that while she is sweet, she couldn’t yet be touched safely, walked, and or handled.

They seemed to understand that but were persistent that they could almost touch her now and someone implied I should have left her on the playground until they were able to take care of her. 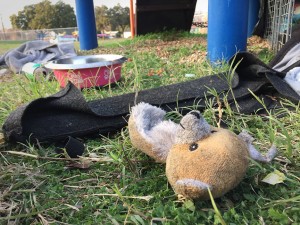 Beckley’s stash of stuff on the playground

The ladies went on to argue with me how they were on top of it and implied what I was doing was unnecessary, until I pointed out that while they were on their two week Christmas break the dog caused a car accident, the dog went down to the highway everyday and stood in the panhandler’s spot and panhandled cars! She has also decided that the playground was hers and was now growling and barking at families walking by trying to use the playground. She was dropping diseased poop, mange, and trash all over their playground. It was at that time two of the teachers walked off. 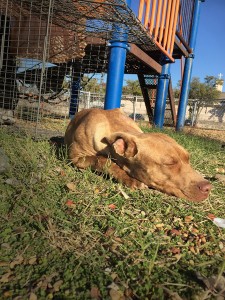 Beckley sleeping on the playground

One teacher stuck with me as we talked about how DAS was coming to pick the dog up because there was no way you could get her in a car safely. She replied that the dog almost got in her car that morning. We discussed that while the dog has a curiosity for the car, she has stood next to mind and put her front paws in many times, that is not everything that is needed to move her in and out of a car safely and take her into a home. 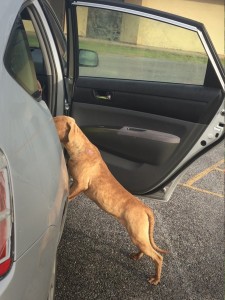 Beckley would think about getting in my car when my dog was in there, but it would inevitably stress her out and start her barking at the car in frustration and fear.

This last teacher finally seemed to start to grasp the situation but was still quietly arguing. I moved any complaint to a responsibility that she could take at any time. I explained again and again that now that the dog was caught that she or anyone could go to DAS and adopt her. She said she would call up there the next day and check on her.

Now here’s the thing. I get it. I understand it from all sides. I understand why those caring teachers were jerks to me. After sitting on the end of a catch pole with an aggressive dog trying to make sure she did not injure herself for 2 hours, I did not appreciate the teacher’s attitude, but I understand it. I was freezing cold, my legs were numb and cramped, I had a migraine, and I was stressed out that DAS would NEVER come and the dog would injure herself on the catchpole. I had dropped my phone several times and could not use it and hold the dog at the same time. Even with all that going on, I understand that the teachers are truly caring people who were genuinely concerned about the dog.

Trying to save an animal is emotional. Street dogs are complicated. The steps from the street to someone’s forever home is tricky business fraught with many dangerous obstacles. Many dogs are euthanized because they don’t have an advocate, or a person, or trainer who knows how to deal with unsocial street dogs. 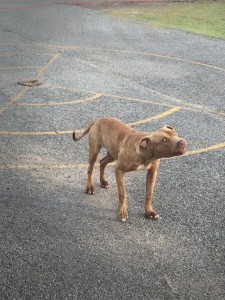 Beckley was not a fan of the leash or the catch pole. When she saw either of them she would bark at you and mean it! 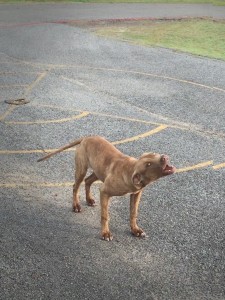 I saw those teeth more than once. 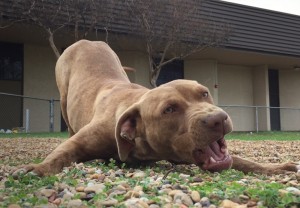 Saw those teeth more than twice…

That doesn’t mean we shouldn’t try. Nor does it doesn’t mean we should leave the dog on the street to suffer and to make more puppies born into the same situation. And trust me, that happens very quickly. That is passive negligence. Let me repeat that, allowing dogs to live on the street because they are “better off than at the shelter” is passive negligence and cruel. It endangers the dog and the humans in every possible way. 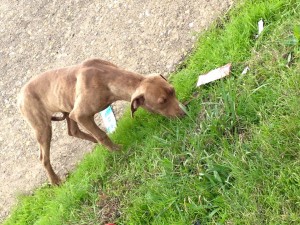 Skinny Beckley would pan handle and eat trash on the side of the highway. She is about 10 months old and had to cross three lanes of service road traffic to get to her favorite spot to pan handle cars. 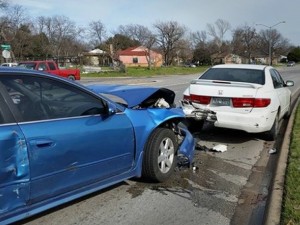 Where did Beckley, our school dog, go during the tornado storms? Where did she go during the freezing cold nights? We know where she went to get food, down to I-35!!!!! That is not acceptable. 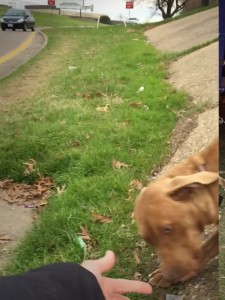 She was also exposed to disease, dog fights, and the untrained people who were told they would be given $20 if they could catch her – so they chased her around and around and tried! It is not a life for an animal that was breed to be our domestic companion. She is not a wild dog or wolf. Domestic dogs need people. They live to serve and love people. 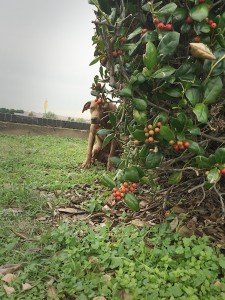 Our first meeting was 15 feet from the service road traffic

Life on the streets is a constant battle of predator or prey. The dogs are always assessing danger, looking for resources, and literally in a fight or flight mode their entire lives on the street. That is not better than a humane euthanasia at the shelter. Street life is not better than trying to catch them and take the chance at a new life, or to make the statistical gamble to try to rehabilitate them sooner rather than later so they have a chance to learn how to be domesticated.

So how can we feel better about doing what’s right? We need to revamp our animal shelter system. Dallas Animal Services needs to modernize and understand it needs a balanced, healthy animal control system that exists side by side with education, compliance, services, and adoption initiatives.

There is a small group of citizens who have formed a grass roots initiative. They have done the research, they have identified modern best practices, they have worked the streets, done education initiatives, run community events with free services for neighborhood animals, petitioned and informed the city council and the animal commission, and written plans to help fix the system and improve the safety and quality of life for our City’s animals and City Hall can’t be bothered to collaborate with this group of knowledgeable residents and advocates. 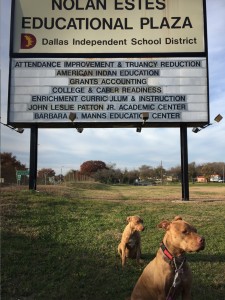 We brought my dog out to try to help catch Beckley.

Dallas deserves better than this. Pardon me Mr Mayor, but you do not “got this”. Give us a call when you are serious about solving the City’s animal and safety and quality of life issues.

After the school dog, Beckley, was caught, we went to visit and work with her at the shelter. She was adopted by the teacher who stayed behind to talk. Beckley is doing well but the dog is at times a very frustrating project and not your average domesticated dog just yet. We’ll be visiting with them and giving some tips and trick to help them along the path to habituation and domestication.  We are very thankful to the teacher to making the commitment to help Beckley and bring her into her home. It is no small commitment and will take lots of patience and love.

Here is a timeline of events and statements from the people involved with the 311 and 911 calls.  This timeline documents the absolute abject failure of DAS, 311, and the 911 system to help citizens with dangerous animal issues. As the person who actually caught the dog, I can not express how upset and angry I was that the dog was at risk of injury due to DAS’ inability to partner in a meaningful manner with the community. Due to the fear of the circumstance, the dog most likely had a seizure while she was on the catch pole. That is a desperate, frustrating, place to be to watch an animal you are trying to help, suffer unnecessarily with no help or relief in sight. The option to leave her there to live on the school campus was not an option. The City is constantly changing and shaping behaviors, for both the citizens and the animals, in a negative way. That catch day was another life changing moment for me and for Gypsy Dog Ops and the Oak Cliff Animal Initiative.  We’ll be sharing more soon about what ideas and what actions came from that dramatic, emotionally and physically exhausting  day. Again, Mr Mayor, when you are serious about solving the City’s animal issues – give us a call.