I have had the same botttle of Urine Gone (as seen on TV)  for year, YEARS. And then there was Jack. After 2 cases of Costco paper towels and 36 ounces of Urine Gone (as seen on TV), Jack is almost reliably house trained.  At 8 weeks old, please don’t think poorly of Jack. Jack the puppy was not unwilling to learn, but due to his massive kidney infection, he was unable to hold it for more than 2-3 minutes. Seriously, minutes. That’s a lot of paper towels!

To make things even more complicated, Jack was antibiotic resistant. Not a common thing in puppies. You could tell he really wanted to learn to potty train, he just literally could not do it as his infection turned for the worse. 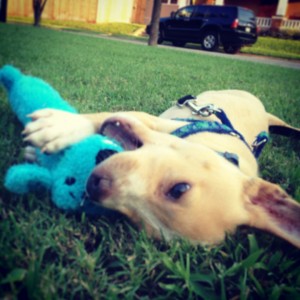 Why is Jack’s story important? A lot of people surrender or abandon dogs and cats because they go potty or act naughty in the house.  People often get frustrated and don’t realize there could be a potential medical issue. Jack’s potty troubles were probably why Jack was dumped on the streets in downtown Dallas in 107 degree weather. Jack was near death when he was found. But with a couple of trips to the vet and lots of TLC – Jack is now doing great, thriving, and training. 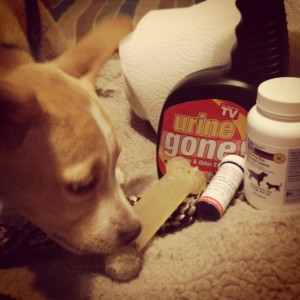 Jack with his supplies

Following conventional training methods, most animals are perfectly willing and quick to house train.  If they are not able to train, there is probably a medical issue.

It is important to have a baseline understanding of what your pet should be capable of. For example, a new puppy should be able to hold it for 1 hour for every month of age. 2 months = 2 hours.  A kitty cat should not be expected to share a litter box or use a dirty one. If these needs are met and a kitty is still going outside of its box – there might be a medical issue.

Animals cannot tell us what is wrong, but if we pay attention to their behavioral changes, we can understand when something is wrong. Medical issues need quick attention to keep them from becoming long term bad behavioral habits. Don’t wait too long to get your pet checked out.

In Jack’s honor, here are some great puppy house training tips, general puppy training tips, and a few examples of bevioral issues that could have medical roots:

The article below from  Dr. V and her Pawcurious blogs shows clear cases and medical issues to look for when your pet changes their behavior. From the blog:

Veterinarians and trainers work hand-in-hand on a daily basis to try and understand why our pets do the things they do. With time and experience, both experts learn the signs that clue us in as to whether a pet has a problem rooted in behavior or in medicine. Here are some classic examples:

1. My dog suddenly regressed on his potty training.

Dogs with a long history of being thoroughly housebroken that suddenly start having accidents are most commonly dealing with a medical issue. Some common medical causes of inappropriate urination can be diabetes, Cushings disease, cystitis, bladder tumors, incontinence, renal disease, or orthopedic disease. In fact, the number one cause of death in dogs with Cushings (an adrenal disorder) is euthanasia from owners who can no longer deal with the urinating in the house (a side effect of overproducing urine.)

2. My cat is suddenly peeing outside the box.

This one is a little trickier, as litterbox aversion is a common and complicated behavioral issue that can be challenging to differentiate from marking without expert guidance. In either case, one also needs to rule out the common urologic problems in cats: cystitis, diabetes, renal disease, or blockage.

3. My dog just had a major aggressive episode.

We recently had a case in our clinic with a very sweet 3 year old terrier who, without warning, attacked the other dog in the house, then the owner when he tried to break them up. The concerned owner went directly to their experienced trainer, who decided that something didn’t make sense when he got the full history. After some detective work and a consult with a neurologist, they learned that the young dog had a brain tumor, and began radiation therapy.

The challenge with behavioral issues is that there is often not a good way to definitively diagnose that problem. In most cases, diagnosis is made by exclusion- by getting a thorough history, and then ruling out the underlying medical issues that can masquerade as a behavioral one.

Any time there is a sudden onset of an unusual behavior, an abrupt change in a long-standing habit, it raises a red flag for me. When these types of situations arise, it’s invaluable to have both a vet and a trainer you trust, who can work together and with you to find out what’s going on with your pet.

You can find Dr. V at Pawcurious, where she blogs about her life as a vet, mom, and pet owner.