Frankie is ready to find his forever family 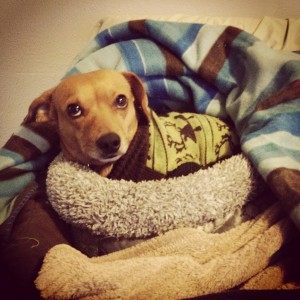 Frankie had his final vet check this past weekend. He has been given a clean bill of health and is ready for adoption! Frankie is a super sweetie. He is some kind of fabulous mix of min-pin and chi-weenie that = adorable! Nothing makes him happier than to just sit in your lap or in his little snuggly cat bed next to you on the couch. He is a loyal companion, he likes to hunt squirrels, and he is a good watch dog. He likes other dogs and is very used to hanging with the big dogs – literally. He really doesn’t get into much trouble. He will chew random paper if it is sitting next to him on the couch (and I am not looking) – but generally, he knows to chew his toys and he is good, obedient boy. He is very anxious to please. He is potty trained, crate trained – walks perfectly on a leash. LOVES to go for walks. Did I mention how much he loves to go for walks? 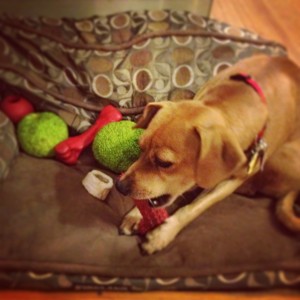 We have tested him out on kids, he did just fine. We tested him out on cats at the clinic, he was not very interested. He does like to run and play with my dogs. We have one big dog that plays a little rough, Frankie uses the approriate amount of something something to let her know to back it up when she is being too rough. She and Chankla will grab onto the same toy and everything remains sunshine and roses while they play. He greets total strangers with a big tail wag and a happy hello. 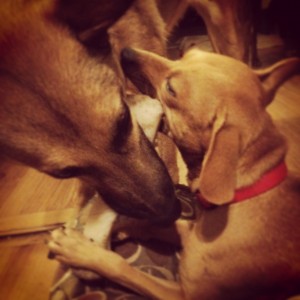 We have tossed Frankie into the middle of the Operation Floopy Ear puppy pile and he was very behaved. He was not too excited about being overun by all the puppies (there are 7 of them), but he sat still and ignored them to appease me. He even sat still while Rudy was chewing on the back of his sweater. 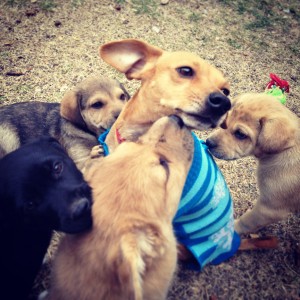 Don’t let Frankie’s checkered past taint your picture of him. Now that he doesn’t have to fend for himself anymore, has regular meals, has been neutered, and lives with dog friends and a person who takes care of him – he is super happy. Nothing makes him happier than to hang out with people. He just wants to be loved. He is a special little guy and he deserves a life of luxury as a spoiled rotten family member.

What’s Frankie’s story? Frank was picked up in October. He was partying in the dog pack (full of pit bulls) vying for the love of Number Two. He had a collar, no tags. We could not find his owners. He was running around for quite some time. He was not neutered and so he probably ran away from home in search of “love”. On the subject of his owners, if a dog is two years old, has not been neutered, is heartworm positive, and is afraid of people – he probably did not have good owners. But we made an honest try to find his owners.

Frankie was pretty shy and what we would call “unsocialized”. It took me awhile to catch him, probably about a week. Hot dogs finally did him in. Thus him name, Frankfurter or Frankie. I turned him into Dallas Animal Services (DAS) encase his people were looking for him. DAS declared him “unadoptable” because he was shy, which meant that after his three day hold period was up he was in jeopardy of being euthanized. I will save you from my soap box rant about how a dog being shy does not actually put him in the “unadoptable” category – but I digress. Back to Frankie….as soon as his hold was up, I bailed him out / adopted him.

He was sick from being on the streets and not being taken care of. He had a respiratory thing that took a LONG time to clear up. Once we cleared that up, we treated him for heartworms. He took a while to get healthy, but there will be no long term issues now that he is healthy. He had his final check with the vet this last Saturday, and he has been given a clean bill of health.

Please help Frankie find his forever home. Mostly because he is a fabulous dog that will be a grateful and loving addition to any family, but also because we can not help more little guys like Frankie, dogs that would have otherwise been euthanized at DAS, until we place the sweet dogs that we have now. Please share and post this page to help get Frankie exposure to his potential forever family.

It takes a village to help the city’s urban feral, hard to catch, and unsocialized dogs. All dogs have value and our success stories show that a little extra time and care can yield amazing results with street dogs. They become the most grateful and loving dogs. Thank you for helping advocating and care for animals.

If you are interested in adopting Frankie and giving him a new life in a forever home, please contact us to set up a meet and greet and or a date.

For your viewing pleasure, the gallery of Frankie