A big thanks to Sharon Grigsby again for another great article about Dallas’ dog crisis. But I would like to add a few thoughts to the conversation about Blue the dog’s “happy ending”.  First, let me say that I am overjoyed that this beautiful family pet was reunited with his family. They seem very happy to have him back. His return is wonderful news and a great endorsement for microchipping your pets.

Understand that for what I am about to say, I am not solely picking on Blue’s owners or singling them out, I am letting their story represent a subset of dog owners for the sake of a broader conversation. I am sure they are lovely people and that they genuinely love Blue. Also remember that my point of view is that of a resident who has been fighting dog packs and loose dogs in our front yards and on our block for years.

When the packs become very large, a good portion of the pack consists of loose owned intact dogs. The dog packs are partially made up of dogs just like our “happy ending” Blue. These dogs get in colossal fights on our front porches and in front of our houses. They jeopardize the safety of our kids, families, and elderly residents. They change our behaviors and they affect our quality of life. 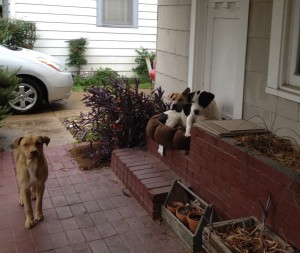 All of these dogs were in the 2013 dog pack. The two males either died or were euthanized due to their injuries from fighting. Number Two, the female with the floppy ear (in the bed), was a 2nd generation feral dog born the streets. She was eventually rescued, but not before she had 5 more puppies.

This a component of the animal issue story that is hard to hear and digest without sounding like an exaggeration at first, but I have pictures and the testimonial of others to support years of this. I have documented the dogs that were fighting over female dogs on our block and in our neighborhoods. I have pictures of their injuries. When I caught or trapped these dogs, DAS immediately euthanized them due to their injuries. Let me sum that up a little differently, loose intact family pets, just like Blue, are regularly euthanized over injuries sustained while fighting over female dogs in our yards and neighborhoods. That is not a happy ending, even if a dog has a microchip. 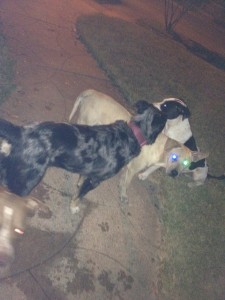 The two male dogs are about to get in a BIG fight over the female dog in the middle. There were 6 large male dogs that night. The collared dog is loose owned dog. He turned out to be the puppy’s baby daddy, there is one puppy that looks just like him.

Blue’s owners and owners like them are contributing to our crisis and to these conditions. As a collective, these irresponsible owners should face some kind of consequence for their choice to keep an intact dog and for letting it getting loose. It doesn’t have to be a monetary consequence, but it probably should be part of the penalty.

Being underserved or poor is not an excuse for breaking the law and not paying a speeding ticket or any other citation for a violation of the law. There is room for grace. When people can’t afford to pay a code compliance ticket, they can often do community service to pay it off. I am all for that kind of balance along with an education component. I know that sounds harsh, but here’s some additional why behind that thought.

Blue’s owners lost their INTACT dog who wandered around Dallas for months. The dog is most likely now partly responsible for countless litters of unwanted puppies. If one (1) dog can be responsible for 600 dogs over 3 years, do the math on what that Blue probably accomplished in his 8 months on the road. I’m not that great at math, but I think o’l Blue is now potentially responsible for about 136 more unwanted dogs. I wonder what the cost of that is to the city. Let me repeat that statistically accurate number: 136 more unwanted dogs came from an irresponsible owner insisting on owning an intact dog and not confining it properly. An enforceable spay and neuter culture is one of the only things that is going affect behavior regarding this issue.

The other thing to point out is that the owners lost their INTACT male dog who got into a fight with another intact male dog over a female dog. Two wrongs don’t make a right…but three wrongs led to the euthanasia of one of the dogs. This situation is just like what has happened over and over in my front yard and in my neighborhood over the years. The brown dog was euthanized by DAS due to its injuries, even though it was know that it most likely had an owner. The injuries were reported to be so bad that the dog was suffering. This shows that the dogs did not have an insignificant dog fight. It also appeared from his scars as though Blue had been in more than one fight. 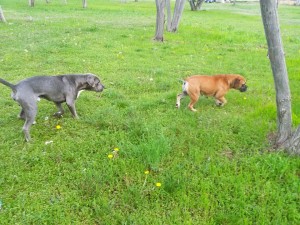 So lastly, Blue deserved better than to roam the streets for months loosing weight and getting in dog fights over resources and lady dogs. This is not the life we envision for our companion animals. People and their selfish choice to have an intact dog failed him. Unless you are a licensed breeder, there is no reason to have an intact dog. There are in fact many more benefits to having your family pet spay or neutered and bite rates against family members go down significantly. 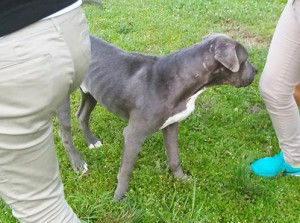 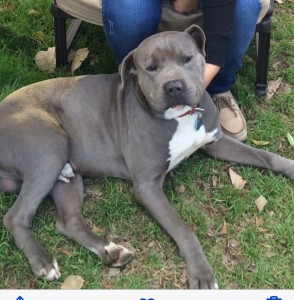 Blue before he was lost

I understand and appreciate that Blue’s owners are now going to neuter their dog which is wonderful. But why as a community do we have to learn not to touch the stove by touching the stove and the result is that the animals get injured? 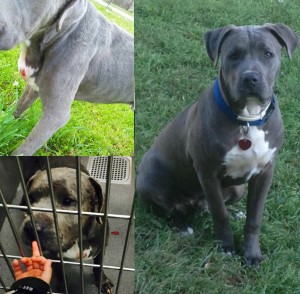 I am hopeful (but not confident) that DAS checked to make sure Blue’s rabies is up to date since he fought with other dogs. Did the owners have to take a responsible dog ownership class before they picked up their dog? Did they pay any fines? Probably not on both cases, but they should.

How many people and how much time went to helping all three of these dogs because owners simply didn’t think the law applied to them? I know I got phone calls that night Blue was picked up. I know my tax dollars went towards resources to pick them up, hold them, and to euthanize one of them.  That makes me frustrated and sad because it all could have been avoided.

Don’t hear that I think dogs should never get out and we should not give people grace. I am not saying people’s dogs don’t get out. My dogs have accidentally gotten out before. I am not saying people’s dogs don’t ever get in dog fights, they are dogs after all. But when people choose to keep an intact dog, their responsibility and their liability is much higher. The citizens and the animals should not pay the price for an owner’s inability to respect their responsibility to their decision to own an intact dog.

Change starts with a no tolerance take on breaking spay and neuter laws. There is room for people to have intact animals in this stance, there are licenses and laws for this. But we must understand that intact animals are much more likely to get loose and so the responsibility to own and confine them is much higher.

In all my years of picking up loose dogs in Oak Cliff, I think I have picked up, at best, maybe two dogs that were spay or neutered. And I have picked up my share of dogs; the numbers are a little staggering. What that tells you is that there is NO room for tolerance regarding INTACT animals getting loose without consequence to the owners.

Dallas, let’s get serious about a spay and neuter culture for our City. Let your City leaders know that you are serious about compliance and that you expect enforcement. This starts with all of us, with YOU – let your City leaders know your expectation for safe neighborhoods and a better quality of life for both people and animals. Let them know spay and neuter compliance matters.

What happened to the female dog in our 2013 pack pictures? She ran the neighborhood for over a year after we caught her Momma, Tasha, the husky. 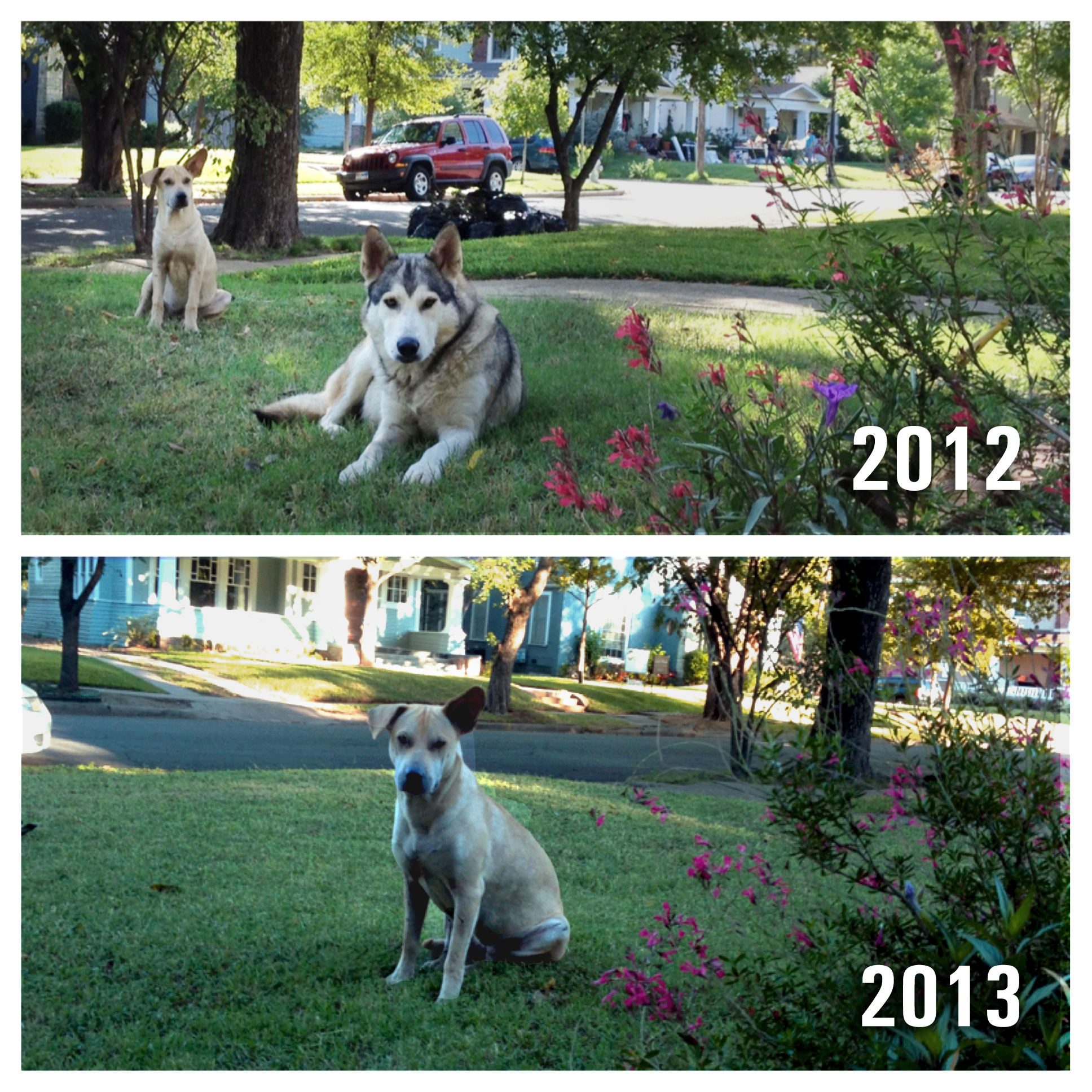 She went on to have her puppies under a house during an epic snow storm. 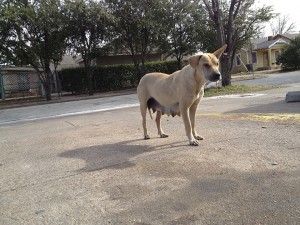 It took us a while to find her.

We caught her and her puppies, but it wasn’t’ pretty 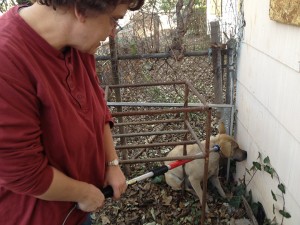 She was not an easy catch. This is a licensed veterinarian holding the catch pole and we are waiting for the sedative to kick in. 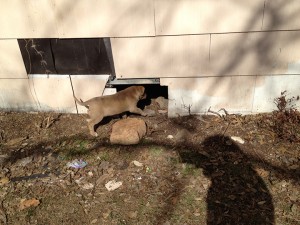 Her puppies weren’t an easy catch either. I had to climb in that tiny hole to get them. Feral puppies don’t come when you call them. 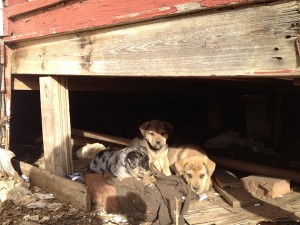 The puppies lived in horrible conditions before we found them. 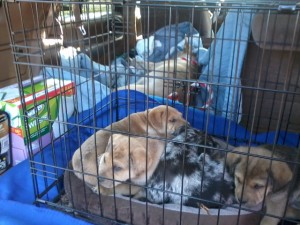 Eventually, after two trips, we caught everyone and took them to safety and started socializing them all.

Why does it matter that Blue was running loose? This next picture has three generations of the same hard to catch loose urban feral dog pack. The math is undeniable – we must have a strong spay and neuter culture and a system that supports enforcement. The dogs deserve better. 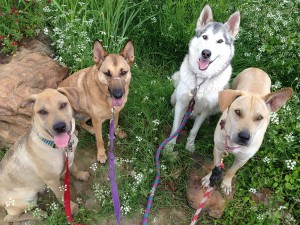 Pictured here are three generations of feral dog packs that was partially formed and caused by loosed owned dogs. They would have all been euthanized at the shelter for being unsocial. Two of them are still looking for their forever homes.

We have to stop the cycle with a strong spay and neuter culture. Budget and election season are fast approaching. Use your voice!

One last update on Blue. A few months after this article was written, we heard that once Blue returned home, Blue go into it with the other family dog and it was ugly. I was told he killed the other dog. The family made the difficult, but understandable, decision to euthanize Blue. If only we had a Time Machine. Sadly, we don’t. But we can continue to advocate for a strong spay and neuter culture and help the next guy.