Tips on how to catch a loose dog

So vexing – you try to help a loose dog and they run away. Why do dogs run away when you try to catch and help them? Don’t they know you want to help? Well, honestly, no, they don’t. You are not speaking the same language and they see you as a threat. How can that be? You are a dog person!? Dogs love you! But dogs have their own language and in order to get them to trust us when they are loose, we need to understand their language and signals.

As requested at this year’s Oak Cliff Animal Initiative, we are working on putting together a class that anyone can attend to learn about dog behavior and dog language in regard to loose dogs. In the meantime, here are some simple easy tips to catch a loose dog.

While I have a few innate qualities that dogs love like bad (non-threatening) posture and a gentle spirit, I have also learned from a great behaviorist and from the street dogs themselves about dog language and how to make a loose dog interested in you and want to trust you.

But before you try to catch an unknown dog, assess the situation with the unknown dog. Understand your skills, abilities, and comfort level and be careful! We have another blog post about what to do once you catch a stray dog. It always good to know what you want to do after you catch them. But first, the catching.

How to catch a loose dog (owned or otherwise)

First, do not chase the dog. If they start running, don’t run after them. Try one or several of these techniques as you try to gain the dog’s interest and trust:

The dogs will become curious, especially if you have good treats. Keep your movements small and slow and you can place treats around you to draw them near.  Gradually moving into their space while you are sitting down with your back to them is very effective. Staying still when you can’t see them requires trust and a calm state on your part. It’s not for everyone. And remember direct eye contact is not desirable and can be considered as aggressive by the dog. Turn your head up and away which is a non threating position. Looking down can sometimes be misinterpreted. Be quiet and patient and they should come over.

This technique is the reason the 12th street shepherd marched straight up to me after he wouldn’t go to many others during the course of the day. It is also the reason he started immediately following me when I came back – we were “friends” in his book.

This is also the method used to catch Trapper and his pack. They were all caught by hand with the exception of White Patch. 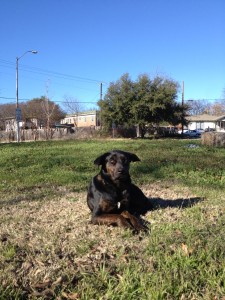 Trapper let me approach him in his field because I zig-zagged across the fence line on the alley and gradually backed up into his space looking totally uninterested in him. 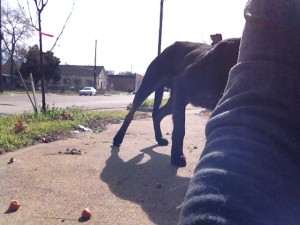 Here is the elusive Trapper warming up to my back in pursuit of hot dogs. 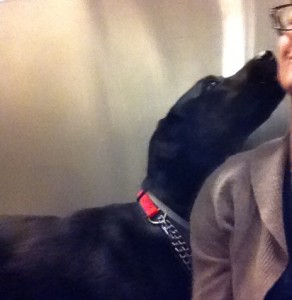 Here he is giving kisses in his kennel at Dallas Animal Services during his 72 hour hold. 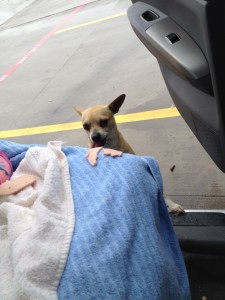 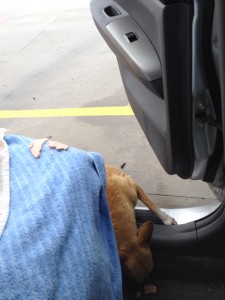 Almost in, but her buddy started barking like a maniac when she started to get in the car. She backed out. 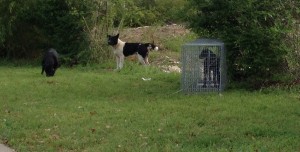 The dogs stayed even when one went in the trap because they considered me a safe person. As soon as the Animal Services truck hit the street, they jumped up and ran. They do not considered DAS officers safe people. From the dog’s perspective, their interaction has been negative and predatory – so they run.

More to come soon as we announce the class date. In the meantime, call 311 and report loose dogs, practice your skills, and teach your personal dog good recall!