“Sick as a dog” and other feverish google searches

So much I wanted to do today, but the day was lost to a sick day. More specifically, a “sick as a dog” day. Around 3am I found myself contemplating if I was the victim of an accidental allergic dairy overdose or the intestinal virus making the rounds in my circle of friends. Unfortunately for me, it was probably a double whammy. As I contemplated death from dehydration, the morning wore on and I found myself on a phone call with my mother. After a few minutes I told her I needed to go because I was “sick as a dog”. Note to self: this is an effective tactic to get off the phone with your mother. Much more effective than the equally as truthful “I am running late and getting ready for work” or “I am in traffic and need to concentrate”….seriously effective.

So back to the expression “sick as a dog”. This expression has meaning at my house as we are always taking in some new medical hot mess street dog and fixing it up. Most recently, Hank. A few weeks ago we posted about him having the equivalent of doggie Ebola, “sick as a dog” for sure. But as I was feverishly lying in bed this morning smothered by my blanket of concerned dogs, it got me wondering, where does that expression come from? And why do dogs get so much etymological press: Seriously, think about it, there are tons of wacky dog expressions:

• As sick as a dog • Barking dog never bites • Call off the dogs • Couldn’t get elected dogcatcher • Dirty dog • Dog and pony show • Dog days • Dog eat dog • Dog-ear • Dog’s age • Dog-tired • Every dog has its day • Everyone and their dog • Give a dog a bad name • Gone to the dogs • Hair of the dog that bit you • Have a dog in the hunt • Hot diggety dog! • It’s a dog’s life • It’s raining cats and dogs! • Let sleeping dogs lie • Like a dog with a bone • Lucky dog • Meaner than a junkyard dog • See a man about a dog • Shouldn’t happen to a dog • The tail wagging the dog • Top dog • There’s life in the old dog yet • Three dog night • Work like a dog • You can’t teach an old dog new tricks 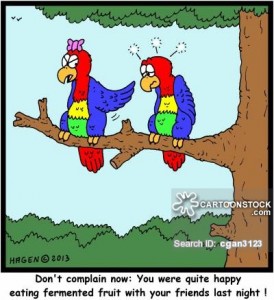 But I digress, it’s the fever. Conveniently enough, when you are in a fevered stupor, you can google from the dog pile in the bed. Here’s what I found. There are several forms of the expressions that date from the eighteenth and nineteenth centuries. The most interesting of which is that “sick as a dog” actually morphed from “sick as a parrot”. The saying has a nautical history. It’s not news that parrots used to hang out on ships with the pirates. Here’s the fun stuff. The onboard food supply contained raw fruit that would easily spoil. The rotted fruit was given to the parrots to eat. The juice of fruit would turn to alcohol, the parrots would eat it and then the parrots would get woozy, drunk, and then, well you all know what unfortunate consequences comes next. Polly want a cracker? No, Polly wants a double cheeseburger and fries from In and Out. 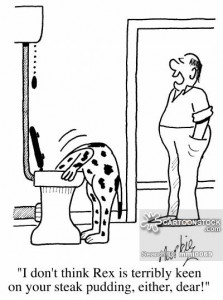 When the phrase was transported to America, it morphed into “sick as a dog,” not referring to someone with a cold or flu, but the nauseous reaction one gets after eating something disagreeable. We all know dogs will eat anything and that result usually ends up in my car, or that one time squirrel tartar ended up on Terry’s carpet…you get the idea. So “sick as a dog” and “sick as a parrot” means to “ralph” or vomit like one. Huh. I have been using that all wrong. But don’t think for one minute that I’m going to stop using the phrase incorrectly. I have discovered an expedient way to get off a phone call with my mother!

I think my nausea and fever have come down enough to try to eat some bland stuff. I guess there are some conveniences to having a dog that is “sick as a dog” in the house. We already have sicky food like rice and chicken broth cooked and ready to eat. Thanks Hank. And we have a medicine cabinet full of goodies designed to calm the feral-est of dog stomachs. I guess today it really is a dog’s life around here, but more in that gone to the dogs kind of way.